A Cas9 protein discovered in meningitis bacteria can act as precise ‘scissors’ for both types of genetic material, cutting at a desired spot guided by CRISPR RNAs 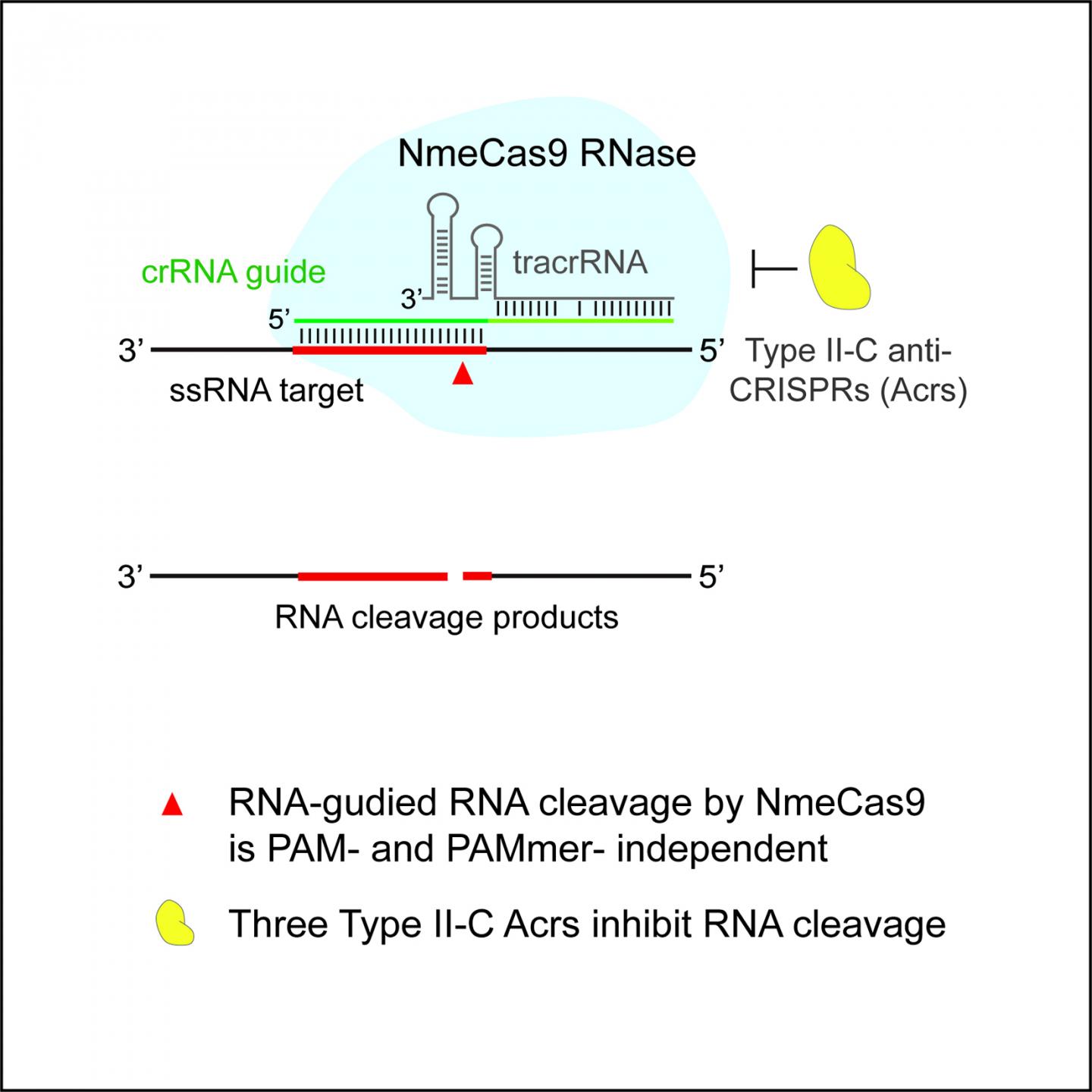 IMAGE: A depiction of how the NmeCas9 protein can be used as part of the CRISPR technique to edit single-stranded RNA.

ANN ARBOR, Mich. — A tool that has already revolutionized disease research may soon get even better, thanks to an accidental discovery in the bacteria that cause many of the worst cases of meningitis.

Called CRISPR-Cas9, the tool acts as molecular scissors — able to cut DNA at exactly the spot it’s asked to. But it can’t cut the other kind of genetic material found in cells, called RNA.

Now, researchers at the University of Michigan have discovered a single protein that can perform CRISPR-style, precise programmable cutting on both DNA and RNA. This protein is among the first few Cas9s to work on both types of genetic material without artificial helper components.

Their initial biochemical study in laboratory test tubes, published in the journal Molecular Cell, show the promise of the new CRISPR approach using the protein called NmeCas9. It’s derived from Neisseria meningitidis, the bacteria that cause some of the most severe and deadly cases of meningitis each year.

Now, the team is working to test the tool in living bacteria cells, to see if NmeCas9 achieves the same effect that they saw in test tubes. They hope to eventually progress to human cells. If it works, NmeCas9 could help expand the role of CRISPR in studying – and perhaps intervening – in many diseases.

“The fact that our protein has dual function – able to target both DNA and RNA – gives us the opportunity to develop platforms to do dual targeting,” says Yan Zhang, Ph.D., the U-M assistant professor of Biological Chemistry who led the research team. “It may make it possible to perform CRISPR cutting on both RNA and DNA at once, or alternatively just on single-stranded messenger RNA without affecting genomic regions at all.”

In cells, the DNA contained in chromosomes acts as the permanent encyclopedia of instructions for making everything the cell needs. But to actually make anything, cells need RNA transcribed from the chromosomes.

One of RNA’s most important functions in cells is the “photocopying” of stretches of DNA, so that machines within the cell can read the instructions and make proteins. Many diseases arise from problems with cellular RNAs.

Zhang, and co-first authors Beth A. Rousseau and Zhonggang Hou, Ph.D., developed and tested the NmeCas9 protein in their lab at the U-M Medical School.

The CRISPR “scissor” technique has transformed research in just five years. It has made it possible for hundreds of teams of scientists to snip out portions of chromosome that are mutated, or to see what happens when a certain gene isn’t there.

To understand CRISPR in simple terms, imagine a pair of scissors that have one side of a zipper attached to the tip of the blades. In order to cut a stretch of DNA at exactly the right spot, the zipper has to match up exactly with a stretch of DNA leading up to that spot – forming a tight bond that positions the scissors in just the right place.

In CRISPR, the “zipper” is made of specially designed RNA, and the “scissor” effect comes from the harnessing the natural cutting action of a protein, or enzyme, called Cas9. The CRISPR revolution has made it possible to design unique RNA zippers that can attach to specific genes that play a role in a disease, and cut them out.

The first human clinical trials using CRISPR to cut a flawed section of DNA are reported to be under way in China, and preparing to begin in the U.S. Research is also under way to see if human embryos containing disease-related genetic mutations can be changed through CRISPR, though there is controversy about the ethical implications of this practice, known as “germline editing.”

The new technique developed by Zhang and her team aims to produce a pair of universal genetic scissors. And, because NmeCas9 is a much smaller protein than other Cas9 proteins used in CRISPR editing, they hope it will be more useful.

The discovery of NmeCas9 happened by accident, when the team was studying the basic function of the NmeCas9 protein in cutting DNA. The U-M team was using RNA as the comparison, or a control sample – but noticed that it was getting cut too.

Digging deeper, they discovered the dual-cutting function of NmeCas9, and began testing it biochemically.

In addition to their discovery, they’re aware that two other groups are either preparing to report or have just reported Cas9 proteins from other bacteria that can carry out RNA targeting without any stimulatory co-factors, unlike previous RNA-editing CRISPR-Cas9 techniques.

“If NmeCas9 works in live cells as it has in vitro, we can develop it as a tool to edit the messenger RNA transcript, which means we might be able to block a gene product without manipulating the gene itself,” says Zhang. “We might also be able to harness it as a research tool to deliver fluorescent markers to specific RNA sequences, or to block events like RNA splicing. All that has been achieved with CRISPR Cas9 to manipulate the chromosomes, we might be able to do at the RNA level.”

The work was funded by the National Institutes of Health (GM117268) and by the U-M Medical School’s Biological Sciences Scholars Program, which supports outstanding biomedical research scientists during the first years of their careers at U-M. In addition to Zhang, Rousseau and Hou, the study’s authors also include Max Gramelspacher.