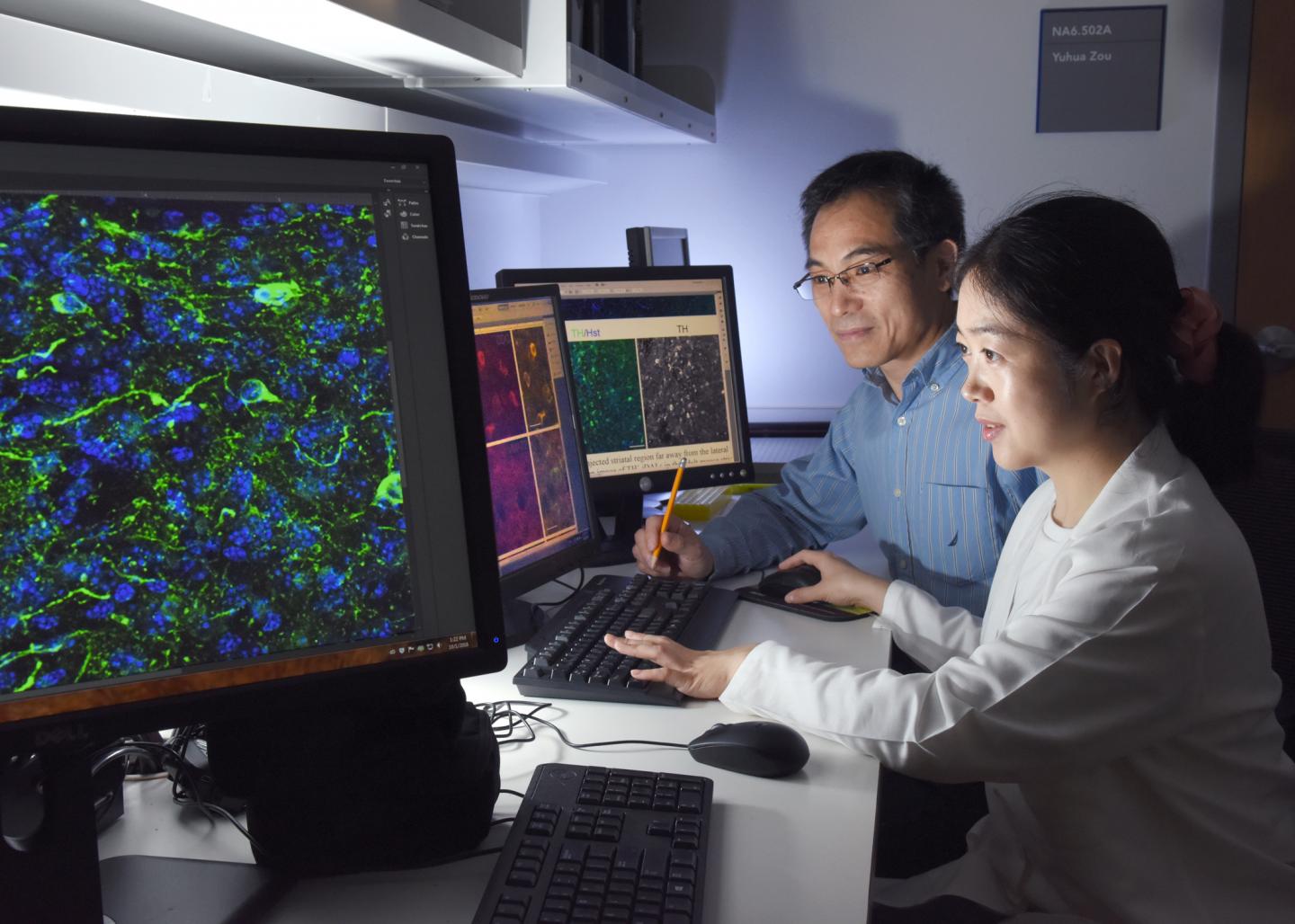 Attempting to make dopamine-producing neurons out of glial cells in mouse brains, a group of researchers instead converted mature inhibitory neurons into dopaminergic cells. Their findings, appearing October 11 in the journal Stem Cell Reports, reveal that–contrary to previous belief–it is possible to reprogram one mature neuron type into another without first reverting it to a stem-cell-like state.

“Initially, I was a little disappointed that we converted medium spiny neurons instead of glia,” says first author Chun-Li Zhang, a professor of molecular biology at UT Southwestern Medical Center (@UTSWNews). “But when we realized the novelty of our results, we were kind of amazed. To our knowledge, changing the phenotype of resident, already-mature neurons has never been accomplished before.”

Dopaminergic cells are important for controlling voluntary movement and emotions such as motivation and reward that drive behavior. They are often lost in movement disorders like Parkinson’s disease. Many neuroscientists are interested in the therapeutic potential of creating new dopaminergic cells.

Zhang and his team attempted to induce the glia–cells surrounding neurons with protective and other functions–to morph inside live mouse brains. They injected a viral vector to express a cocktail of proteins into the striatum, a region of the brain rich in GABAergic neurons that help control muscle movement. The cocktail consisted of three transcription factors, NURR1, FOXA2, and LMX1A, which help decode genetic instructions for building dopaminergic neurons. The mice were also treated with valproic acid, which was previously shown to play a role in cell reprogramming.

The team targeted glial cells due to their ability to regenerate and multiply more readily than neurons, theoretically making them better therapeutic candidates. But when they looked at the brain slices of the injected mice, they found the glia unchanged. Instead, some GABAergic medium spiny neurons–cells that are directly controlled by dopaminergic neurons–had transformed.

The new cells appeared to behave more like native dopaminergic neurons, although they also retained residual features of the medium spiny neurons. They showed rhythmic activity and formed network connections similarly to dopaminergic cells, as the researchers discovered through electrode recordings and reporter assays.

Subsequent immunohistochemistry and reporter assays revealed that the new cells sprung from mature medium spiny neurons without passing through a proliferative progenitor stage.

“Our results offer a new perspective on neuronal plasticity,” says Zhang. “We traditionally think of mature cell identity and function as fixed, but our findings suggest that they are more dependent on biochemical factors in their environment than we thought. This could mean that no cell type is fixed even for a functional, mature neuron.”

Zhang and his team next seek to address some of the limitations of their findings by clarifying the exact reprogramming mechanism and, of course, identifying the conditions that can reprogram glia into dopaminergic neurons, as they originally sought.

“We hope that the ability to change neuron identity will someday be directed to treat neurological diseases, including Parkinson’s disease,” says Zhang.

Like Loading...
‹ Nice people finish last when it comes to money
Researchers engineer dual vaccine against anthrax and plague ›