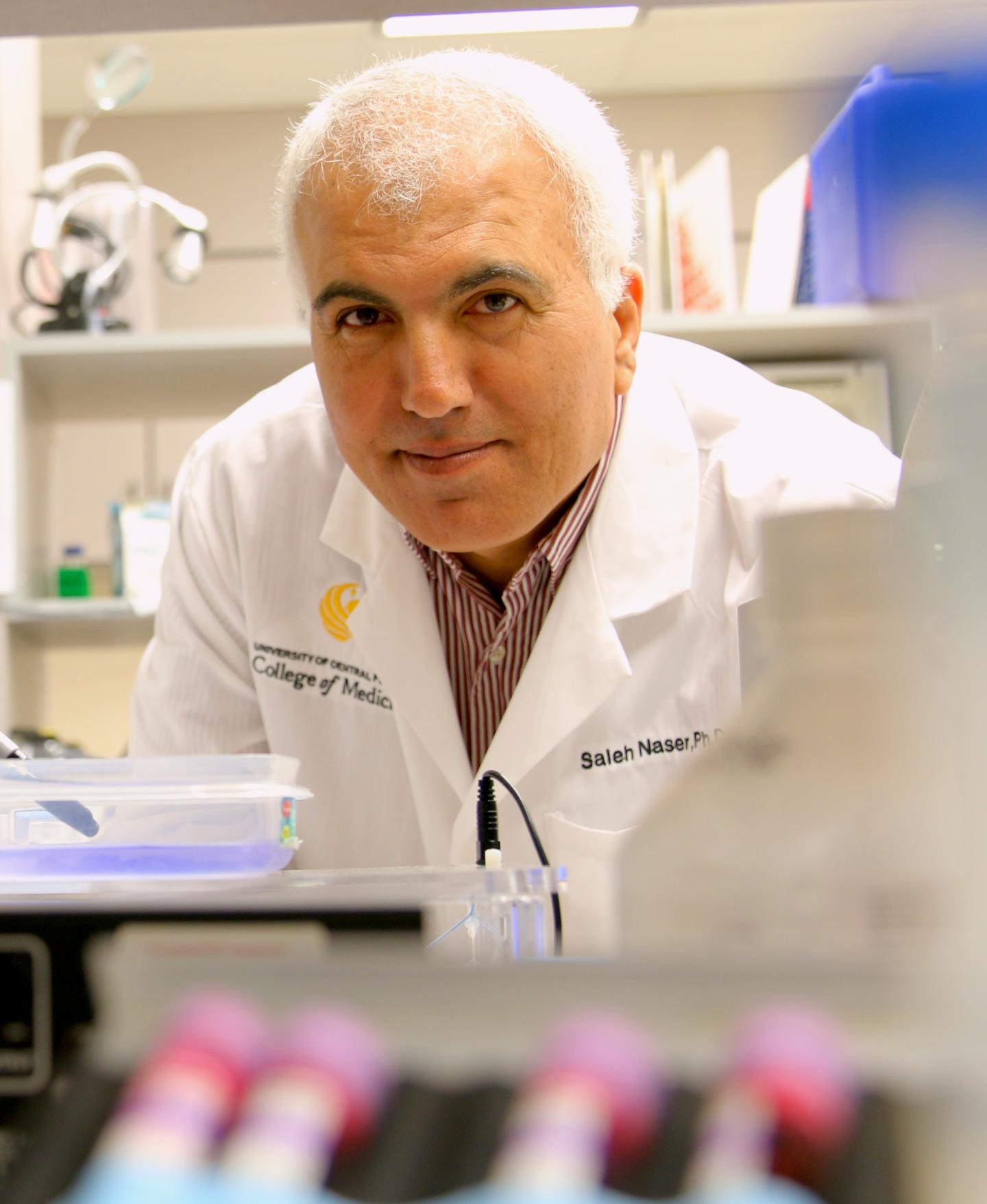 Saleh Naser and his team UCF College of Medicine researchers has discovered a link between rheumatoid arthritis and Mycobacterium avium subspecies paratuberculosis, known as MAP, a bacteria found in about half the cows in the United States.

A strain of bacteria commonly found in milk and beef may be a trigger for developing rheumatoid arthritis in people who are genetically at risk, according to a new study from the University of Central Florida.

A team of UCF College of Medicine researchers has discovered a link between rheumatoid arthritis and Mycobacterium avium subspecies paratuberculosis, known as MAP, a bacteria found in about half the cows in the United States. The bacteria can be spread to humans through the consumption of infected milk, beef and produce fertilized by cow manure.

The UCF researchers are the first to report this connection between MAP and rheumatoid arthritis in a study published in the Frontiers in Cellular and Infection Microbiology journal this week. The study, funded in part by a $500,000 grant from the Florida Legislative, was a collaboration between Saleh Naser, UCF infectious disease specialist, Dr. Shazia Bég, rheumatologist at UCF’s physician practice, and Robert Sharp, a biomedical sciences doctoral candidate at the medical school.

Naser had previously discovered a connection between MAP and Crohn’s disease and is involved in the first ever phase III-FDA approved clinical trial to treat Crohn’s patients with antibiotics. Crohn’s and rheumatoid arthritis share the same genetic predispositions and both are often treated using the same types of immunosuppressive drugs. Those similarities led the team to investigate whether MAP could also be linked to rheumatoid arthritis.

“Here you have two inflammatory diseases, one affects the intestine and the other affects the joints, and both share the same genetic defect and treated with the same drugs. Do they have a common trigger? That was the question we raised and set out to investigate,” Naser said.

For the study, Bég recruited 100 of her patients who volunteered clinical samples for testing. Seventy-eight percent of the patients with rheumatoid arthritis were found to have a mutation in the PTPN2/22 gene, the same genetic mutation found in Crohn’s patients, and 40 percent of that number tested positive for MAP.

“We believe that individuals born with this genetic mutation and who are later exposed to MAP through consuming contaminated milk or meat from infected cattle are at a higher risk of developing rheumatoid arthritis,” Naser said.

About 1.3 million adults in the U.S. have rheumatoid arthritis – an autoimmune and inflammatory disease that causes the immune system to attack a person’s joints, muscles, bones and organs. Patients suffer from pain and deformities mostly in the hands and feet. It can occur at any age but the most common onset is between 40 and 60 years old and is three times more prevalent in women.

Although case studies have reported that some RA patients suffer from Crohn’s disease and vice versa, the researchers say a national study needs to investigate the incidence of the two diseases in the same patients.

“We don’t know the cause of rheumatoid arthritis, so we’re excited that we have found this association,” Bég said. “But there is still a long way to go. We need to find out why MAP is more predominant in these patients – whether it’s present because they have RA, or whether it caused RA in these patients. If we find that out, then we can target treatment toward the MAP bacteria.”

The team is conducting further studies to confirm findings and plan to study patients from different geographical and ethnic backgrounds.

“Understanding the role of MAP in rheumatoid arthritis means the disease could be treated more effectively,” Naser said. “Ultimately, we may be able to administer a combined treatment to target both inflammation and bacterial infection.”

Naser holds a Ph.D in Medical Microbiology from New Mexico State University. He joined UCF in 1995. He has been investigating Crohn’s disease and other auto-immune diseases for more than 30 years. He has published more than 100 peer-reviewed articles and has presented his work at numerous conferences. He has several patents including a licensed DNA technology for detecting MAP.

Bég, a board-certified rheumatologist, has been with UCF since 2011 after completing her fellowship in rheumatology at Baylor College of Medicine in Houston. In addition to practicing medicine at UCF Health, she is a full-time faculty member at the college. Her research and clinical interests include conditions such as rheumatoid arthritis, psoriatic arthritis, lupus and osteoporosis.

Unexplained .98 Correlation in Deaths to Total Test Results in addition to global and state data.

Sniffing your way to the gym