Are we at a tipping point with weed control?

University of Illinois College of Agricultural, Consumer and Environmental Sciences 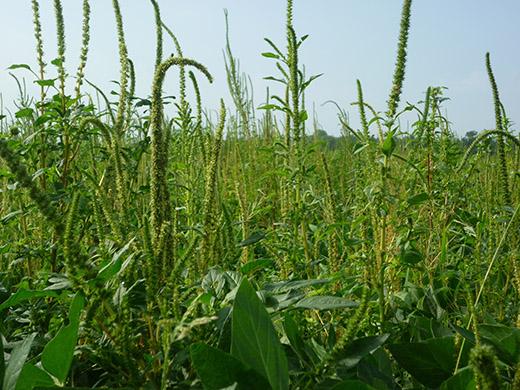 IMAGE: Researcher Adam Davis from the University of Illinois says we’re close to losing chemical control of weeds like Palmer amaranth in some locations.

URBANA, Ill. – Imagine walking the cereal aisle at your favorite grocery store. Are you reading labels? Scanning prices? Thinking about weeds? If you’re like most American consumers, weeds probably aren’t at the forefront of your mind when buying food. But if farmers could no longer control weeds with existing herbicides, Americans would take notice pretty quickly.

“I think the future of cheap food is strongly related to the availability and effectiveness of existing herbicides,” says Adam Davis, ecologist in the Department of Crop Sciences at the University of Illinois and USDA Agricultural Research Service. That is, without working herbicides, food could get a lot more expensive.

Davis and George Frisvold, an economist at the University of Arizona, recently teamed up to consider the possibility that we’ve reached a critical tipping point in our ability to control agricultural weeds with the herbicides currently on the market. They published their analysis in the journal Pest Management Science.

“I believe if we fully lost chemical control of certain weeds, and if farmers continued with the corn-soybean rotation, they’d be forced to reduce their acreages as they spend more time and money managing weeds. And the cost of the end product, our food, would go up as well,” Davis says.

If you’re not in the farming industry, you might not be aware that weeds like common waterhemp and Palmer amaranth can reduce corn and soybean yields anywhere from 30 to 80 percent, and that those weeds are developing resistance to available herbicides. Like antibiotic-resistant “superbugs,” resistant weeds simply can’t be killed by herbicides.

There are lots of herbicides on the market, but they all fall into one of 16 categories describing their mode of action (MOA), or specific target in the plant that the chemical attacks. Because of various regulations and biological realities, a smaller number of herbicide MOAs can be used on any given crop and the suite of weeds that goes along with it. At this point, many weeds are now resistant to multiple MOAs.

“In some areas, we’re one or two MOAs away from completely losing chemical control for certain weeds. For example, in east central Illinois, we have common waterhemp that is resistant to five out of the six relevant MOAs in a corn-soybean rotation,” he says. “And there are no new herbicide MOAs coming out. There haven’t been for 30 years.”

The lack of new herbicides is only one factor that led us where we are today. Davis and Frisvold suggest that herbicide susceptibility in weeds should have been viewed as a finite resource all along, like the global oil supply. As resources start to dwindle, prices should theoretically go up as a way to prevent overuse and total resource exhaustion. But unlike oil, herbicide prices have actually decreased over the past 30 to 40 years.

“The assumption is that, in a rational market, people will use less of a dwindling resource because it gets more expensive or they notice a problem. It’s not happening for herbicides,” Davis says.

The rollout of crops engineered to tolerate herbicides like glyphosate (RoundUp) may have added to the problem. Davis believes their availability led to greater reliance on chemical solutions to weed control, rather than the diverse mix of weed management practices that used to be the norm. And that meant farmers were spraying herbicide more frequently.

But weeds are wily. Like all organisms, they evolve in response to their environment. With more exposure to a certain environmental pressure (in this case, the herbicide), the more opportunity there is for adaptation. Over time, random genetic mutations allowed some weeds to withstand herbicides. Offspring from those plants grew, survived, and reproduced. And so on, until the majority of plants were left with the mutation.

It sounds dire, but Davis remains optimistic. “I believe there’s hope,” he says, “but it requires that we take action to diversify weed management now.”

Just what would it take to bring us back from the brink of total weed domination? Davis has a lot of ideas, but one of the big ones is something he calls the “middle way,” which bridges the gap between the traditional corn-soy rotation with its heavy herbicide inputs and a diversified organic system.

“Right now we have a dominant system where we have two summer annuals following each other. Because we don’t have any change of phenology (timing of development) of the main crop, we have the same weed spectrum in both crops. We never destabilize it. But if you introduce a small winter grain or a forage legume into that system, you begin to make it difficult for summer annual weeds like waterhemp to become dominant. So you can get about 90 percent there just with a good crop rotation.

“Then you build in things like weed suppressive cultivars, banded herbicides, row spacing, cultivation, harvest weed seed control, and all these tactics together can add up to really effective weed management systems. We’ve shown you can reduce herbicide use by 90 percent in diversified systems and get the same amount of weed control. Same profit, same productivity, but two orders of magnitude reduction in environmental pollution, and a 90 percent reduction in fertilizer use. It’s not hard to do for the grower,” he says.

The hard part, he notes, is thinking about economic and regulatory incentives that will help growers diversify their management practices. But he hopes the new article will generate discussion, bring awareness to the issue, and facilitate the stewardship of existing herbicides into the future.

The article, “Are herbicides a once in a century method of weed control?” is published in Pest Management Science and is freely available to the public. Support for the work was provided by the USDA-ARS Area-Wide Pest Management Program.

Contracting COVID-19, lifestyle and social connections may play a role

Probiotics alone or combined with prebiotics may help ease depression