PLA exercises thought to be cause of weeks of disruption in Shanghai, Nanjing and elsewhere 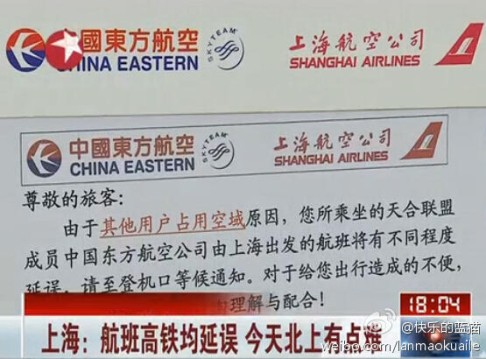 Twelve mainland airports, many of them among the busiest, will be hit by widespread delays until the middle of next month because of what are believed to be PLA military exercises.

The mainland’s civil aviation regulator yesterday told state radio that flights in and out of airports in the country’s east – including Shanghai, Nanjing and Wuhan – would be affected from last Sunday until August 15 by the “high-frequency drills of another user”.

State-run media did not say who was organising the exercises, but it is widely assumed to be the PLA.

Ni Lexiong , a Shanghai-based military affairs commentator, said large-scale military drills centred on the east of the country were needed because it would probably be the first target of any foreign forces attacking China.

Disrupting the operation of 12 civilian airports meant the drills had to be very large-scale, Ni said.

The other affected airports are in Hangzhou, Hefei, Jinan, Wuxi, Ningbo, Qingdao, Lianyungang and Zhengzhou.

Between the early hours of Monday and 6pm yesterday, more than 290 flights at Shanghai’s two airports were delayed or cancelled. Shanghai-based China Eastern Airlines alone had cancelled 22 flights in and out of the affected airports early yesterday morning, the company said.

Airlines would be expected to cut flights out of the affected areas by 25 per cent, state television’s finance and economics channel reported on its Weibo.

Repeated calls made to the Ministry of National Defence and the Civil Aviation Administration of China were not answered yesterday.

A spokeswoman for Hong Kong’s Airport Authority said it had not received any notice about air traffic controls.

Xinhua reported that the PLA had organised 10 live ammunition drills for its ground forces at six bases around the country since July 15.

Yue Gang , a retired colonel in the PLA, said it was not surprising that large-scale military drills had been planned.

“The air force has to prepare itself for mass combat where a number of military commands would be involved, especially as regional tensions keep escalating,” he said.
http://www.scmp.com/news/china/article/1557191/pla-military-drills-believed-cause-25pc-cut-flights-12-mainland-airports