Mayor of London Boris Johnson delivers a speech during a visit to Peking University in Beijing. Photo: Reuters

In a high-profile six-day Beijing visit designed to boost trade relations, outspoken London mayor Boris Johnson took the opportunity to hype his city, pointing out that Chinese visitors were attracted to London because of multiculturalism, fine universities and “beautiful communist bicycles”.

A keen cyclist himself, Johnson may also have meant the joke as a subtle reference to the vast number of bicycles that have always dotted the streets of Beijing. Bicycles have long been a Chinese mainstay, especially for families who cannot afford automobiles, and in the years following the Cultural Revolution, the Chinese government widely encouraged bicycles over cars and buses as an efficient and inexpensive means of transportation. 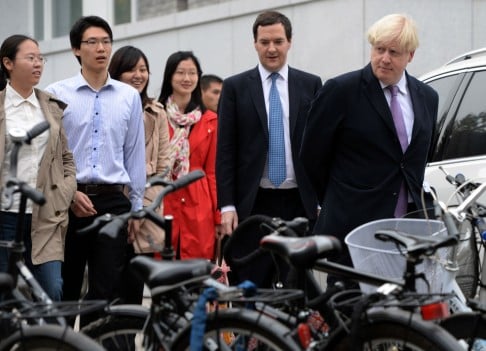 Johnson, who is also a passionate supporter of Chinese investment in the UK, added that Chinese students were flocking to London because of the city’s international image.

“When [Chinese students] look at London, they see the most incredibly diverse, cosmopolitan, multicultural, polychromatic, polymorphous city anywhere in the world,” Johnson said. “As the daughter of a great Chinese businessman explained to me … when you go to America you meet Americans, when you come to London you meet the world.”

Well-known in China for his signature haircut and offbeat way of speaking, Johnson’s visit to Beijing coincides with another trade mission by British Chancellor George Osborne. Both Osborne and Johnson have been named as potential successors to current British Prime Minister and Conservative Party leader David Cameron, who was harshly criticised by Beijing last year for meeting with the Dalai Lama.

When questioned on Sunday by Sky News interviewer Dermot Murnaghan, Johnson said that his trip to Beijing did not have anything to do with quelling the tension that had resulted from Cameron’s meeting with the Dalai Lama.

“My job as mayor is not to have a foreign policy but to get on and promote the interests of the greatest city on earth, which is what we’re doing,” Johnson said. “There are many interesting foreign policy problems around the world I could get involved in; whether or not that would improve global hopes for a resolution, I have my reservations.”

Like Loading...
‹ Security of the Nation’s Power Grid Threatened by Theft, Company Says
The secret life of science in the second world war ›

Curcumin for amyloidosis and lipid metabolism — a novel insight