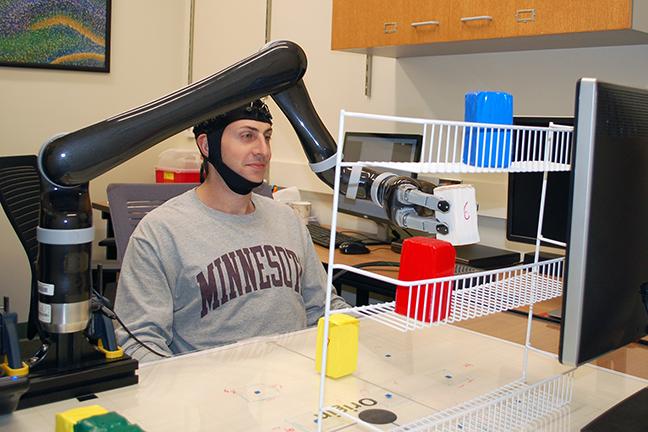 IMAGE: Research subjects at the University of Minnesota fitted with a specialized noninvasive brain cap were able to move the robotic arm just by imagining moving their own arms. view more

Credit: College of Science and Engineering

Researchers at the University of Minnesota have made a major breakthrough that allows people to control a robotic arm using only their minds. The research has the potential to help millions of people who are paralyzed or have neurodegenerative diseases.

The study is published online today in Scientific Reports, a Nature research journal.

“This is the first time in the world that people can operate a robotic arm to reach and grasp objects in a complex 3D environment using only their thoughts without a brain implant,” said Bin He, a University of Minnesota biomedical engineering professor and lead researcher on the study. “Just by imagining moving their arms, they were able to move the robotic arm.”

The noninvasive technique, called electroencephalography (EEG) based brain-computer interface, records weak electrical activity of the subjects’ brain through a specialized, high-tech EEG cap fitted with 64 electrodes and converts the “thoughts” into action by advanced signal processing and machine learning.

“This is exciting as all subjects accomplished the tasks using a completely noninvasive technique. We see a big potential for this research to help people who are paralyzed or have neurodegenerative diseases to become more independent without a need for surgical implants,” He said.

The researchers said the brain-computer interface technology works due to the geography of the motor cortex–the area of the cerebrum that governs movement. When humans move, or think about a movement, neurons in the motor cortex produce tiny electric currents. Thinking about a different movement activates a new assortment of neurons, a phenomenon confirmed by cross-validation using functional MRI in He’s previous study. Sorting out these assortments using advanced signal processing laid the groundwork for the brain-computer interface used by the University of Minnesota researchers, He said.

The robotic arm research builds upon He’s research published three years ago in which subjects were able to fly a small quadcopter using the noninvasive EEG technology. The research gained international media attention.

“Three years ago, we weren’t sure moving a more complex robotic arm to grasp and move objects using this brain-computer interface technology could even be achieved,” He said. “We’re happily surprised that it worked with a high success rate and in a group of people.”

He anticipates the next step of his research will be to further develop this brain-computer interface technology realizing a brain-controlled robotic prosthetic limb attached to a person’s body or examine how this technology could work with someone who has had a stroke or is paralyzed.

To read the full research paper, entitled “Noninvasive Electroencephalogram Based Control of a Robotic Arm for Reach and Grasp Tasks,” visit the Nature Scientific Reports website