How swarms of nanomachines could improve the efficiency of any machine 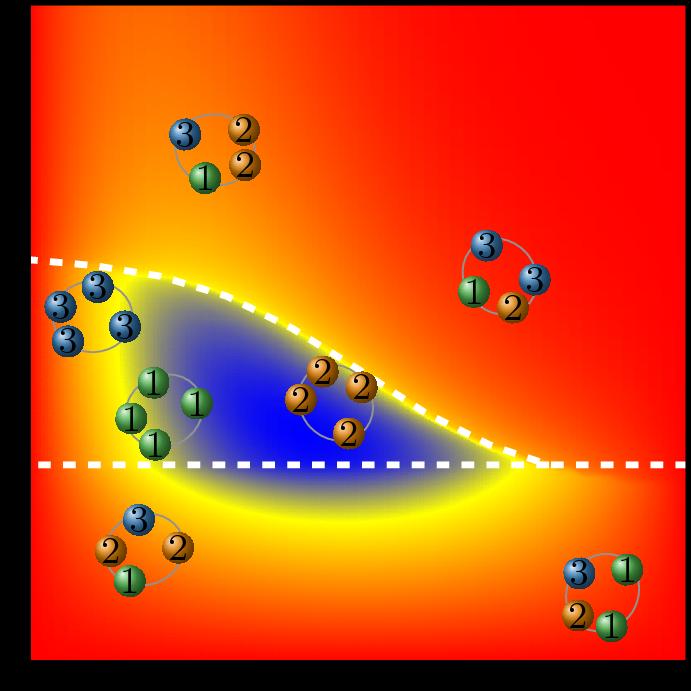 Density plot of the power output of an energy-converting network that consists of interacting nano-machines illustrated by the spheres. The power increases from red to blue color, thus in the synchronization phase corresponding to the area enclosed by the white dashed lines, the output of the network is maximized.

All machines convert one form of energy into another form – for example a car engine turns the energy stored in fuel into motion energy. Those processes of energy conversion, described by the theory called thermodynamics, don’t only take place on the macro-level of big machines, but also at the micro-level of molecular machines that drive muscles or metabolic processes and even on the atomic level. The research team of Prof. Massimiliano Esposito of the University of Luxembourg studies the thermodynamics of small nanomachines only consisting of a few atoms. In a paper published in the prestigious scientific journal Physical Review X, they outline how these small machines behave in concert. Their insights could be used to improve the energy efficiency of all kinds of machines, big or small.

Recent progress in nanotechnology has enabled researchers to understand the world in ever-smaller scales and even allows for the design and manufacture of extremely small artificial machines. “There is evidence that these machines are far more efficient than large machines, such as cars. Yet in absolute terms, the output is low compared to the needs we have in daily life applications,” explains Tim Herpich, PhD student at Esposito’s research group and main author of the paper. “That is why we studied how the nanomachines interact with each other and looked at how ensembles of those small machines behave. We wanted to see if there are synergies when they act in concert.”

The researchers found that the nanomachines under certain conditions start to arrange in “swarms” and synchronise their movements. “We could show that the synchronisation of the machines triggers significant synergy effects, so that the overall energy output of the ensemble is far greater than the sum of the individual outputs,” said Prof. Esposito. While this is basic research, the principles outlined in the paper could potentially be used to improve the efficiency of any machine in the future, the researcher explains.

In order to simulate and study the energetic behaviour of swarms of nanomachines, the scientists created mathematical models that are based on existing literature and outcomes of experimental research.

Like Loading...
‹ Taste and Smell disorders in Chemotherapy alleviated by Lactoferrin Supplementation
Smart devices could soon tap their owners as a battery source ›