Home › All Posts › Disease and Conditions › Found: A new form of DNA in our cells (**NOT** a double-stranded DNA double helix)

Found: A new form of DNA in our cells (**NOT** a double-stranded DNA double helix)

Scientists have tracked down an elusive ‘tangled knot’ of DNA 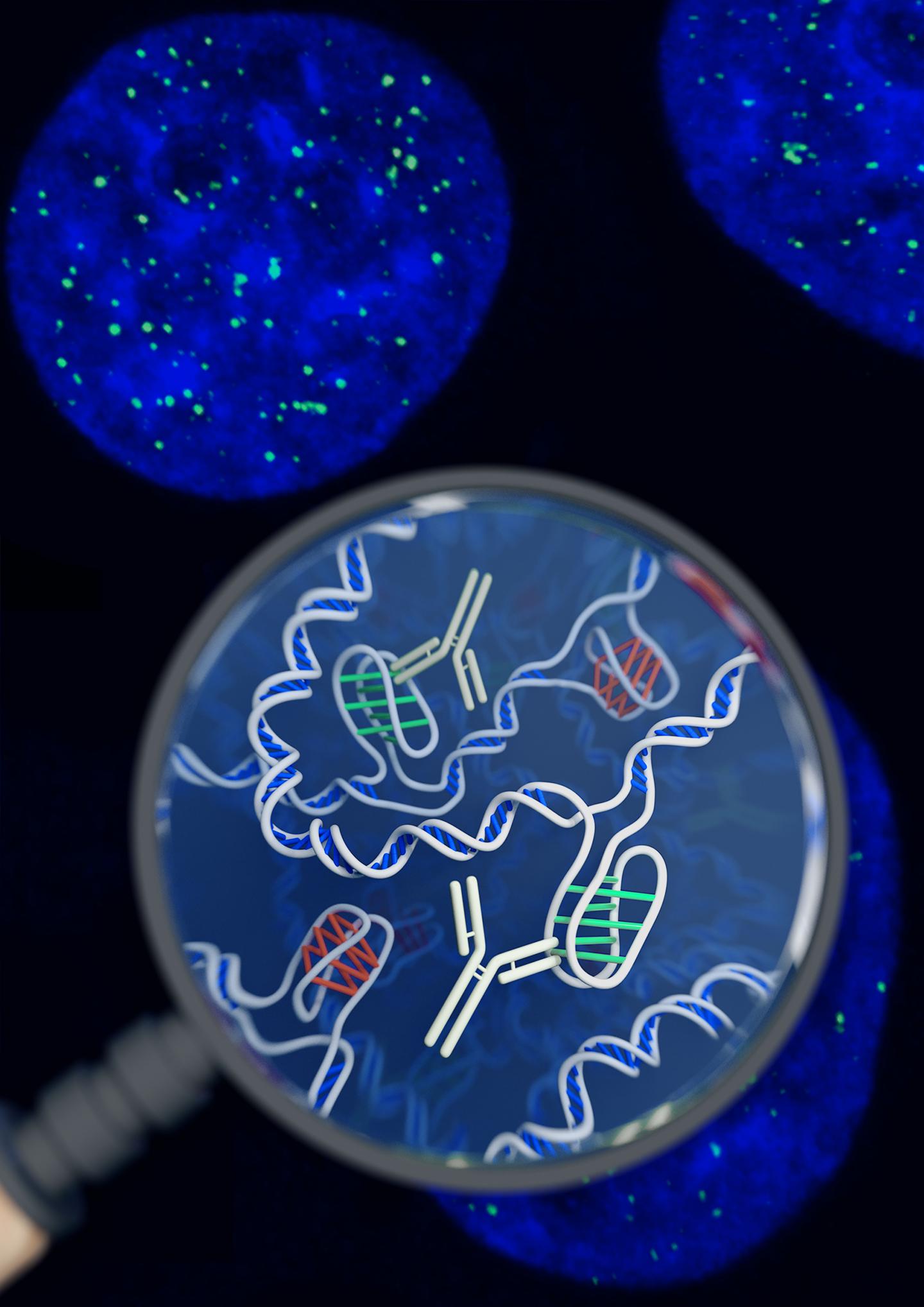 IMAGE: This is an artist’s impression of the i-motif DNA structure inside cells, along with the antibody-based tool used to detect it

In a world first, Australian researchers have identified a new DNA structure – called the i-motif – inside cells. A twisted ‘knot’ of DNA, the i-motif has never before been directly seen inside living cells.

The new findings, from the Garvan Institute of Medical Research, are published today in the leading journal Nature Chemistry.

Deep inside the cells in our body lies our DNA. The information in the DNA code – all 6 billion A, C, G and T letters – provides precise instructions for how our bodies are built, and how they work.

The iconic ‘double helix’ shape of DNA has captured the public imagination since 1953, when James Watson and Francis Crick famously uncovered the structure of DNA. However, it’s now known that short stretches of DNA can exist in other shapes, in the laboratory at least – and scientists suspect that these different shapes might play an important role in how and when the DNA code is ‘read’.

“When most of us think of DNA, we think of the double helix,” says Associate Professor Daniel Christ (Head, Antibody Therapeutics Lab, Garvan) who co-led the research. “This new research reminds us that totally different DNA structures exist – and could well be important for our cells.”

“In the knot structure, C letters on the same strand of DNA bind to each other – so this is very different from a double helix, where ‘letters’ on opposite strands recognise each other, and where Cs bind to Gs [guanines].”

Although researchers have seen the i-motif before and have studied it in detail, it has only been witnessed in vitro – that is, under artificial conditions in the laboratory, and not inside cells.

In fact, scientists in the field have debated whether i-motif ‘knots’ would exist at all inside living things – a question that is resolved by the new findings.

To detect the i-motifs inside cells, the researchers developed a precise new tool – a fragment of an antibody molecule – that could specifically recognise and attach to i-motifs with a very high affinity. Until now, the lack of an antibody that is specific for i-motifs has severely hampered the understanding of their role.

With the new tool, researchers uncovered the location of ‘i-motifs’ in a range of human cell lines. Using fluorescence techniques to pinpoint where the i-motifs were located, they identified numerous spots of green within the nucleus, which indicate the position of i-motifs.

“What excited us most is that we could see the green spots – the i-motifs – appearing and disappearing over time, so we know that they are forming, dissolving and forming again,” says Dr Mahdi Zeraati, whose research underpins the study’s findings.

The researchers showed that i-motifs mostly form at a particular point in the cell’s ‘life cycle’ – the late G1 phase, when DNA is being actively ‘read’. They also showed that i-motifs appear in some promoter regions (areas of DNA that control whether genes are switched on or off) and in telomeres, ‘end sections’ of chromosomes that are important in the aging process.

Dr Zeraati says, “We think the coming and going of the i-motifs is a clue to what they do. It seems likely that they are there to help switch genes on or off, and to affect whether a gene is actively read or not.”

“We also think the transient nature of the i-motifs explains why they have been so very difficult to track down in cells until now,” adds A/Prof Christ.

A/Prof Marcel Dinger says, “It’s exciting to uncover a whole new form of DNA in cells – and these findings will set the stage for a whole new push to understand what this new DNA shape is really for, and whether it will impact on health and disease.”

About the Garvan Institute

The Garvan Institute of Medical Research is one of Australia’s largest medical research institutions and is at the forefront of next-generation genomic DNA sequencing in Australia. Garvan’s main research areas are: cancer, diabetes and metabolism, genomics and epigenetics, immunology and inflammation, osteoporosis and bone biology, and neuroscience. Garvan’s mission is to make significant contributions to medical science that will change the directions of science and medicine and have major impacts on human health. http://www.garvan.org.au