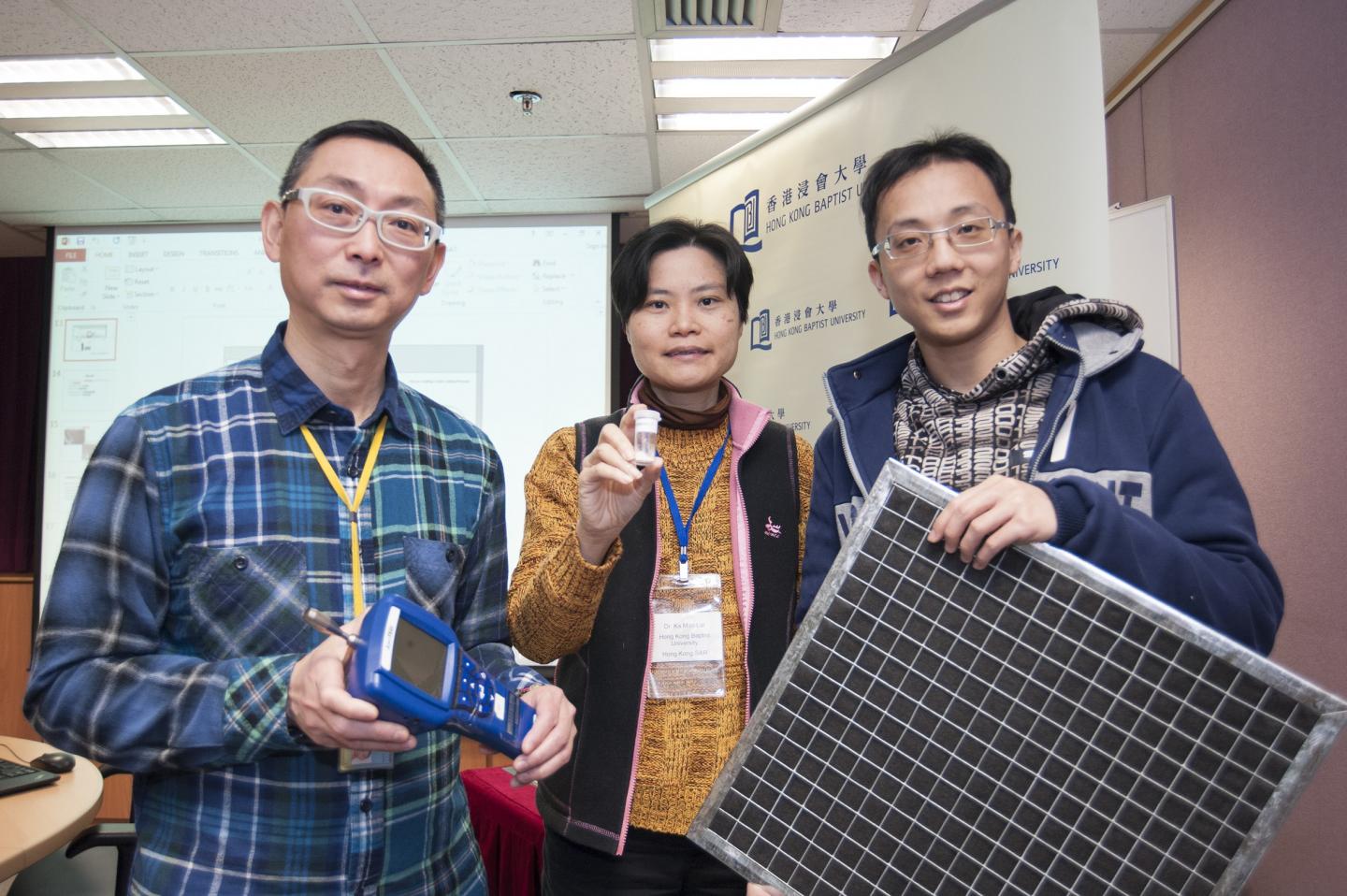 IMAGE: This is (Centre) Dr Lai Ka-man, Associate Professor of the Department of Biology of HKBU.

Skin squames are a source of food for the bacteria found in air-cooling units, which produce odours even in a dust-free air-conditioning system, a research by Hong Kong Baptist University scholars revealed. This research is the first to show that the accumulation and bacterial degradation of skin squames (cells that peel off from the skin surface) in air-cooling units is positively correlated to the complaints of urine-like smell in air-conditioned areas.

The study was led by Dr Lai Ka-man, Associate Professor of the Department of Biology of HKBU. It found that skin squames shed from the human body can contribute to ammonia (urine-like smell) and volatile fatty acid (body odour) production by bacteria colonising air-cooling units. Skin squames consist of keratins which are structural proteins that can be degraded by keratinase, enzymes produced by some bacteria.

The released protein-based fuel source is then consumed by bacteria and broken down to ammonium. With limited amounts of carbon available in the environment, it can lead to excessive amounts of ammonium being emitted into the air and lead to urine-like smell. Other than keratins, skin squames also contain other microbial nutrients such as lipids and fatty acids, and natural metabolites found on human skin. These nutrients are also consumed by the bacteria and degraded into different kinds of volatile short-chain fatty acids that are often linked to the smell of body odours.

Dr Lai said air quality in indoor environments is associated with people’s health and well-being and should be given due attention since many Hong Kong people spend more than 70% of their time indoors. She said odour leads to discomfort and low productivity, and it is commonly believed that odour problems are due to a dirty air-conditioning system which contains accumulated dust and harbours different types of microbes. Therefore, cleaning the system repeatedly is the general practice to eliminate the odour. However, the study found that odour was sometimes reported from clean air-conditioning systems without visible dust accumulation, and cleaning the system repeatedly is not a sustainable measure to mitigate the odour emission.

Dr Lai also observed that although the Hong Kong Environmental Protection Department has issued the Indoor Air Quality (IAQ) guidelines, these guidelines are inadequate to help property inspectors and engineers to identify potential odour-causing units. Therefore, the team also investigated and compared 10 microbial samples from air-cooling units with and without odour complaints in order to improve the current IAQ inspection. After studying the biological properties of the isolated bacteria, the team reported that Staphylococcus species emitted from the air-conditioning system may hint to a potential odour-causing unit.

Dr Lai said, “For effective long-term odour control, it is important to reduce the amount of skin squames from entering the air-cooling units. To do so, the simplest way is to install an appropriate filter to capture the skin squames in the air. The size of skin squames is generally larger than 10 micrometres (or 0.001 centimetres). A filter that can effectively capture particles less than this size should help improve the odour problem.”

The study entitled “Skin squames contribute to ammonia and volatile fatty acid production from bacteria colonizing in air-cooling units with odor complaints” was published in Indoor Air (DOI: 10.1111/ina.12439). Another related study entitled “Viable airborne microbial counts from air-cooling units with and without complaints of urine and body odors” was published in Aerobiologia (DOI: 10.1007/s10453-016-9466-y).

Both studies were funded by the Environment and Conservation Fund of the HKSAR Government’s Environmental Protection Department and Woo Wheelock Green Fund.

Like Loading...
‹ BA or DA? Decoding syllables to show the limits of artificial intelligence
12,800 years ago the Earth was on fire ›

One in ten people may still be infectious for COVID after ten days, new research indicates

Why do we forget? New theory proposes ‘forgetting’ is actually a form of learning