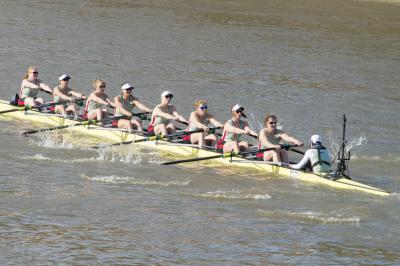 Cambridge University Women’s Boat Club openweight crew rowing during the 2017 Boat Race on the river Thames in London. The Cambridge women’s crew beat Oxford in the race. The members of this crew were among those analyzed in the study.

Credit: Alastair Fyfe for the University of Cambridge

A new study comparing the bones of Central European women that lived during the first 6,000 years of farming with those of modern athletes has shown that the average prehistoric agricultural woman had stronger upper arms than living female rowing champions.

Researchers from the University of Cambridge’s Department of Archaeology say this physical prowess was likely obtained through tilling soil and harvesting crops by hand, as well as the grinding of grain for as much as five hours a day to make flour.

Until now, bioarchaeological investigations of past behaviour have interpreted women’s bones solely through direct comparison to those of men. However, male bones respond to strain in a more visibly dramatic way than female bones.

The Cambridge scientists say this has resulted in the systematic underestimation of the nature and scale of the physical demands borne by women in prehistory.

“This is the first study to actually compare prehistoric female bones to those of living women,” said Dr Alison Macintosh, lead author of the study published today in the journal Science Advances.

“By interpreting women’s bones in a female-specific context we can start to see how intensive, variable and laborious their behaviours were, hinting at a hidden history of women’s work over thousands of years.”

The study, part of the European Research Council-funded ADaPt (Adaption, Dispersals and Phenotype) Project, used a small CT scanner in Cambridge’s PAVE laboratory to analyse the arm (humerus) and leg (tibia) bones of living women who engage in a range of physical activity: from runners, rowers and footballers to those with more sedentary lifestyles.

The bones strengths of modern women were compared to those of women from early Neolithic agricultural eras through to farming communities of the Middle Ages.

“It can be easy to forget that bone is a living tissue, one that responds to the rigours we put our bodies through. Physical impact and muscle activity both put strain on bone, called loading. The bone reacts by changing in shape, curvature, thickness and density over time to accommodate repeated strain,” said Macintosh.

“By analysing the bone characteristics of living people whose regular physical exertion is known, and comparing them to the characteristics of ancient bones, we can start to interpret the kinds of labour our ancestors were performing in prehistory.”

Over three weeks during trial season, Macintosh scanned the limb bones of the Open- and Lightweight squads of the Cambridge University Women’s Boat Club, who ended up winning this year’s Boat Race and breaking the course record. These women, most in their early twenties, were training twice a day and rowing an average of 120km a week at the time.

The Neolithic women analysed in the study (from 7400-7000 years ago) had similar leg bone strength to modern rowers, but their arm bones were 11-16% stronger for their size than the rowers, and almost 30% stronger than typical Cambridge students.

The loading of the upper limbs was even more dominant in the study’s Bronze Age women (from 4300-3500 years ago), who had 9-13% stronger arm bones than the rowers but 12% weaker leg bones.

A possible explanation for this fierce arm strength is the grinding of grain. “We can’t say specifically what behaviours were causing the bone loading we found. However, a major activity in early agriculture was converting grain into flour, and this was likely performed by women,” said Macintosh.

“For millennia, grain would have been ground by hand between two large stones called a saddle quern. In the few remaining societies that still use saddle querns, women grind grain for up to five hours a day.

“The repetitive arm action of grinding these stones together for hours may have loaded women’s arm bones in a similar way to the laborious back-and-forth motion of rowing.”

However, Macintosh suspects that women’s labour was hardly likely to have been limited to this one behaviour.

“Prior to the invention of the plough, subsistence farming involved manually planting, tilling and harvesting all crops,” said Macintosh. “Women were also likely to have been fetching food and water for domestic livestock, processing milk and meat, and converting hides and wool into textiles.

“The variation in bone loading found in prehistoric women suggests that a wide range of behaviours were occurring during early agriculture. In fact, we believe it may be the wide variety of women’s work that in part makes it so difficult to identify signatures of any one specific behaviour from their bones.”

Dr Jay Stock, senior study author and head of the ADaPt Project, added: “Our findings suggest that for thousands of years, the rigorous manual labour of women was a crucial driver of early farming economies. The research demonstrates what we can learn about the human past through better understanding of human variation today.”