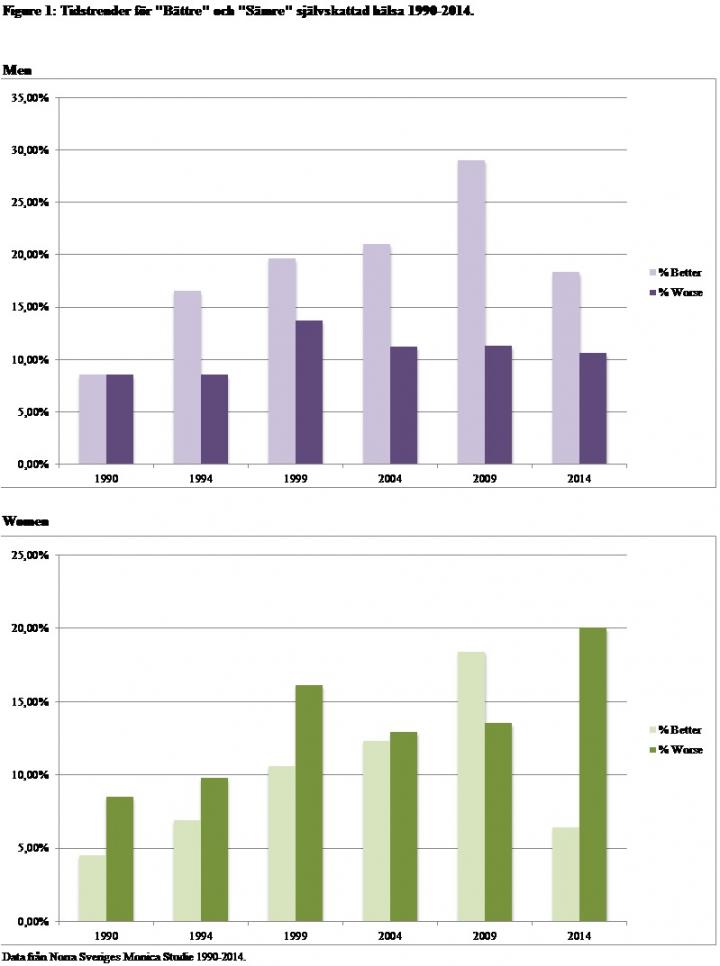 Researchers at Umeå University and Region Norrbotten in Sweden have studied health trends among women and men aged 25-34 from 1990-2014. In 1990, 8.5 percent of women self-rated their health as being worse than peers in their own age group. At 2014, this trend had increased to 20 per cent of women. In contrast, a bigger part of the men self-rated their health as better at the end of the study period compared to the start. This according to a study published in PLOS One.

“In recent years, public debate has raised the issue of increased illness and sick leaves among women. Our study now shows, for the first time, that there are corresponding health trends also among young women,” says Annika Forssén, researcher at the Department of Public Health and Clinical Medicine, general practitioner and co-author of the article.

The researchers behind the study have, through a long-term, population-based survey, analysed answers from 1,811 people in the MONICA study in Northern Sweden. As a part of a standard health check, study participants answered a questionnaire which included questions about self-rated health.

The results also showed that an increased proportion of study participants indicated obesity, anxiety and dissatisfaction with their personal economy, among both women and men. Simultaneously, the proportion of women and men with high levels of physical activity increased over the period.

“A generally worsened self-rated health among young people most likely suggests increased risk of illness both in the short and long term. The results show that gender equality efforts, and especially the promotion of equal rights to health for men and women, need significant revisions,” says Göran Waller, researcher at the Department of Public Health and Clinical Medicine, general practitioner and co-author.

According to the study authors, possible causes for this negative health trend among young women may be:

According to the researchers, some possible reasons for the positive development among men may be:

Join the challenge to explore the Moon!