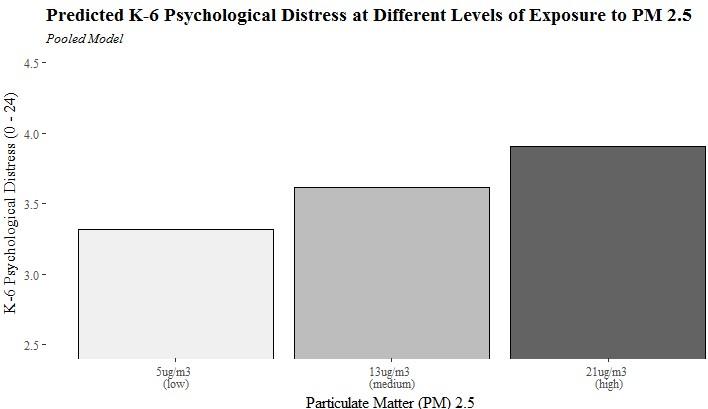 IMAGE: This graph shows that as the amount of fine particulate matter in the air increases, so do levels of psychological distress

There is little debate over the link between air pollution and the human respiratory system: Research shows that dirty air can impair breathing and aggravate various lung diseases. Other potential effects are being investigated, too, as scientists examine connections between toxic air and obesity, diabetes and dementia.

Now add to that list psychological distress, which University of Washington researchers have found is also associated with air pollution. The higher the level of particulates in the air, the UW-led study showed, the greater the impact on mental health.

The study, published in the November issue of Health & Place, is believed to be the first to use a nationally representative survey pool, cross-referenced with pollution data at the census block level, to evaluate the connection between toxic air and mental health.

“This is really setting out a new trajectory around the health effects of air pollution,” said Anjum Hajat, an assistant professor of epidemiology in the UW School of Public Health. “The effects of air pollution on cardiovascular health and lung diseases like asthma are well established, but this area of brain health is a newer area of research.”

Where a person lives can make a big difference to health and quality of life. Scientists have identified “social determinants” of physical and mental well-being, such as availability of healthy foods at local grocers, access to nature or neighborhood safety.

Air pollution, too, has been associated with behavior changes – spending less time outside, for instance, or leading a more sedentary lifestyle – that can be related to psychological distress or social isolation.

The UW study looked for a direct connection between toxic air and mental health, relying on some 6,000 respondents from a larger, national, longitudinal study, the Panel Study of Income Dynamics. Researchers then merged an air pollution database with records corresponding to the neighborhoods of each of the 6,000 survey participants. The team zeroed in on measurements of fine particulate matter, a substance produced by car engines, fireplaces and wood stoves, and power plants fueled by coal or natural gas. Fine particulate matter (particles less than 2.5 micrometers in diameter) is easily inhaled, can be absorbed into the bloodstream and is considered of greater risk than larger particles. (To picture just how small fine particulate matter is, consider this: The average human hair is 70 micrometers in diameter.)

The survey questions relevant to the UW study gauged participants’ feelings of sadness, nervousness, hopelessness and the like and were scored with a scale that assesses psychological distress.

Researchers controlled for other physical, behavioral and socioeconomic factors that can influence mental health, such as chronic health conditions, unemployment and excessive drinking.

But some patterns emerged that warrant more study, explained primary author Victoria Sass, a graduate student in the Department of Sociology.

When the data are broken down by race and gender, black men and white women show the most significant correlation between air pollution and psychological distress: The level of distress among black men, for instance, in areas of high pollution, is 34 percent greater than that of white men, and 55 percent greater than that of Latino men. A noticeable trend among white women is the substantial increase in distress — 39 percent — as pollution levels rise from low to high.

Precisely why air pollution impacts mental health, especially among specific populations, was beyond the scope of the study, Sass said. But that’s what makes further research important.

“Our society is segregated and stratified, which places an unnecessary burden on some groups,” Sass said. “Even moderate levels can be detrimental to health.”

Air pollution, however, is something that can be mitigated, Hajat said, and has been declining in the United States. It’s a health problem with a clear, actionable solution. But it requires the political will to continue to regulate air quality, Sass added.

“We shouldn’t think of this as a problem that has been solved,” she said. “There is a lot to be said for having federal guidelines that are rigorously enforced and continually updated. The ability of communities to have clean air will be impacted with more lax regulation.”

Other authors on the study were professor Kyle Crowder, and graduate student Steven Karceski, both of the UW Department of Sociology; Nicole Kravitz-Wirtz of the University of California, Davis School of Medicine; and David Takeuchi of the Boston College School of Social Work.

The study was funded by the Eunice Kennedy Shriver National Institute of Child Health and Human Development and supported by UW’s Center for Studies in Demography and Ecology.