Was Hillary Clinton wearing an earpiece during last night’s presidential forum? That’s the latest question swirling around the Internet after pictures appeared to show Hillary with some kind of flesh-colored device embedded inside her ear.

Conservative actor James Woods drew attention the issue with the simple question, “Earpiece?” and a close up image of Hillary from last night’s forum.
Woods also posted a Clinton email from the Wikileaks archive in which Huma Abedin asked Hillary, “Did u take your earpiece or do I need to get it?” 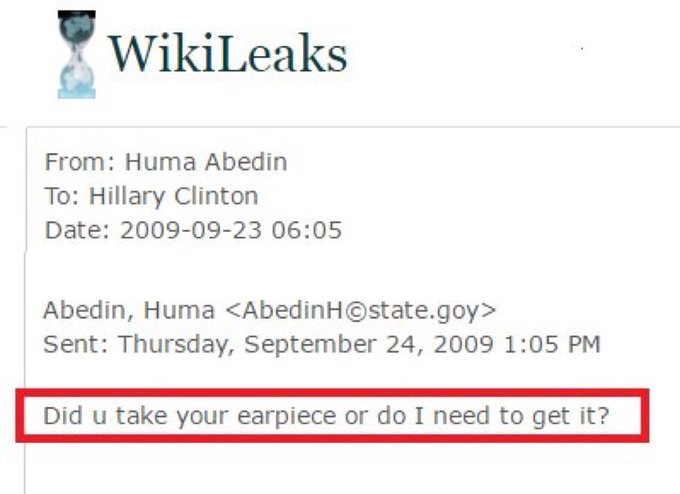 “She literally can’t help herself. She’s the kind of sociopath who will lie even if the truth were more beneficial,” added Woods, linking to an article by TruePundit which reported that Hillary was wearing an earpiece to receive “stealth coaching” during the NBC live town hall event.

“NYPD sources involved with the NBC forum’s security detail confirm Clinton was wearing an ‘inductive earpiece,” the same technology employed by almost all lead Broadway actors to receive forgotten lines and stealth off-stage cues from directors. The flesh-colored earbud is easily concealed. There are no wires running directly to the ear like you see with the units employed by Secret Service protection detail personnel,” claimed the article.

The report goes on to provide technical details about the earpiece, asserting that it is “almost invisible to anyone” and is “normally issued to law enforcement or corporate security teams.”

Like Loading...
‹ ‘You were my greatest love of my life’: Deeply personal emails sent between Colin Powell and a blonde Romanian diplomat revealed by hacker but he DENIES having an affair
Next generation genomic analysis used to probe the former USSR’s biological weapons program ›

Glaucoma may be more than just an issue of eye pressure