A community leader speaks to the crowd at a rally against the proposed college admissions amendment outside the town hall in Cupertino, California. Photo: Guisel Contreras

Hundreds of Asian American families flocked to a community hall in northern California to learn about a state law that many fear would discriminate against their children in college admission because of their race.

“No! No! No!” the crowd chanted outside the hall in Cupertino, an affluent small city in the heart of Silicon Valley, responding to “SCA 5” shouted from a megaphone.

SCA 5 is a state constitutional amendment that seeks to lift the ban on the use of race, sex, colour, ethnicity or national origin in admission at California’s public universities and colleges.

It was approved by the state senate last month but still needs assembly approval before it goes to a referendum.

I have not seen Chinese or Asian Americans get so involved in a very long time
Albert Wang, non-profit organisation leader

Proponents of SCA 5 hope it will make it easier for under-represented minorities, such as black and Hispanic students, to secure enrolment. But Asian communities fear that this will come at their expense.

“I am so appalled to see this bill was proposed,” said Xiaofei Zhang, the father of a girl in 10th grade, after the amendment was debated in Cupertino town hall.

“My wife and I spend the majority of our salaries on our daughter’s education so that she can take piano lessons and learn all the skills that will get her to better universities one day.

“College admission should be solely based on merit. SCA 5 reverses the history and that’s not American.”

Asian students dominate admissions to a level that far outstrips their ethnic representation in California’s population.

In contrast, blacks made up 4 per cent of admissions compared to 7 per cent of the population.

SCA 5 would go to a referendum in November if it passes the State Assembly.

The campaign against the amendment started online with about 100,000 signing petitions. The “No” campaign expanded to town hall meetings and the lobbying of state assembly members. 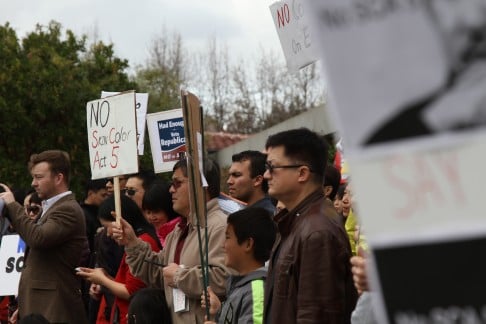 Protesters at a rally against the proposed college admissions amendment outside the town hall in Cupertino, California. Photo: Guisel Contreras” I have not seen Chinese or Asian Americans get so involved in a very long time,” said Albert Wang, a non-profit organisation leader who has been campaigning on civic issues for 25 years.

“For Chinese parents it’s almost their only purpose to have their kids go to great universities, so it really touches a nerve with everyone,” Wang said, after moderating at an SCA 5 debate.

A Chinese American mother with two children, one of them in high school, said: “This proposal is very unfair to Asian Americans.

“We emigrated to this country in the hope that we can reach our goals by our hard work, but not get judged by our race.

“SCA 5 is also bad for America because it will hurt the competitiveness of this country.”

It’s not only Chinese Americans who are opposed to SCA 5. About 200 kilometres north of Cupertino in Sacramento, Kajian Moorthy, 16, is decidedly uneasy after learning about the proposal.

“It was scary for me,” said the Mira Loma High School junior whose parents migrated from Sri Lanka. “My college applications are around the corner and I am worried about consequences.”

Moorthy said he has had to study hard to become one of the top students in his school, and aims to go to the University of California (UC) Berkeley or UCLA (Los Angeles).

He is already enrolled in college-level classes, which he hopes will help him gain admission to his dream school. To boost his extracurricular portfolio, Moorthy also takes part in an after-school debating team.

“It would be unfair if I work hard but don’t get anything in return,” he complained. “Others don’t work hard, but get special treatment.”

Experts say a lack of resources for under-represented minority students has led to unfairness.

They warn that without special treatment, minorities would suffer further marginalisation and the overall education system would be compromised by a lack of diversity. “Black and Latino students are very disproportionately consigned to the poorest performing schools in the state,” said Patricia Gandara, professor of education at UCLA.

“Many of their schools do not have consistent leadership or well qualified teachers.”

Gandara said there was a 21 percentage point gap between under-represented minorities in California’s high school graduating classes and in first-year college enrolment.

Deborah Santiago, chief operating officer of Excelencia in Education, a Washington-based non-profit group focused on advancing equality in higher education, said the impact of SCA 5 “would be minimal in terms of increased participation in the short run, because programmes would have to be developed that meet the strict scrutiny of the Supreme Court rulings on the use of race and ethnicity”.

And Henry Der, former superintendent of Public Instructions with California’s Department of Education, said: “People jumped to conclusions that the bill is going to impose a quota against Chinese students. The word quota does not exist in the bill nor does the issue of racial parity.”

He said the ultimate impact of SCA 5 was “hard to predict”.

Like Loading...
‹ Police say number of people in organised crime syndicates fell below 60,000 for first time on record last year
Russian soldiers training in Canada given 24 hours to leave country ( 9 Soldiers but Symbolic ) ›