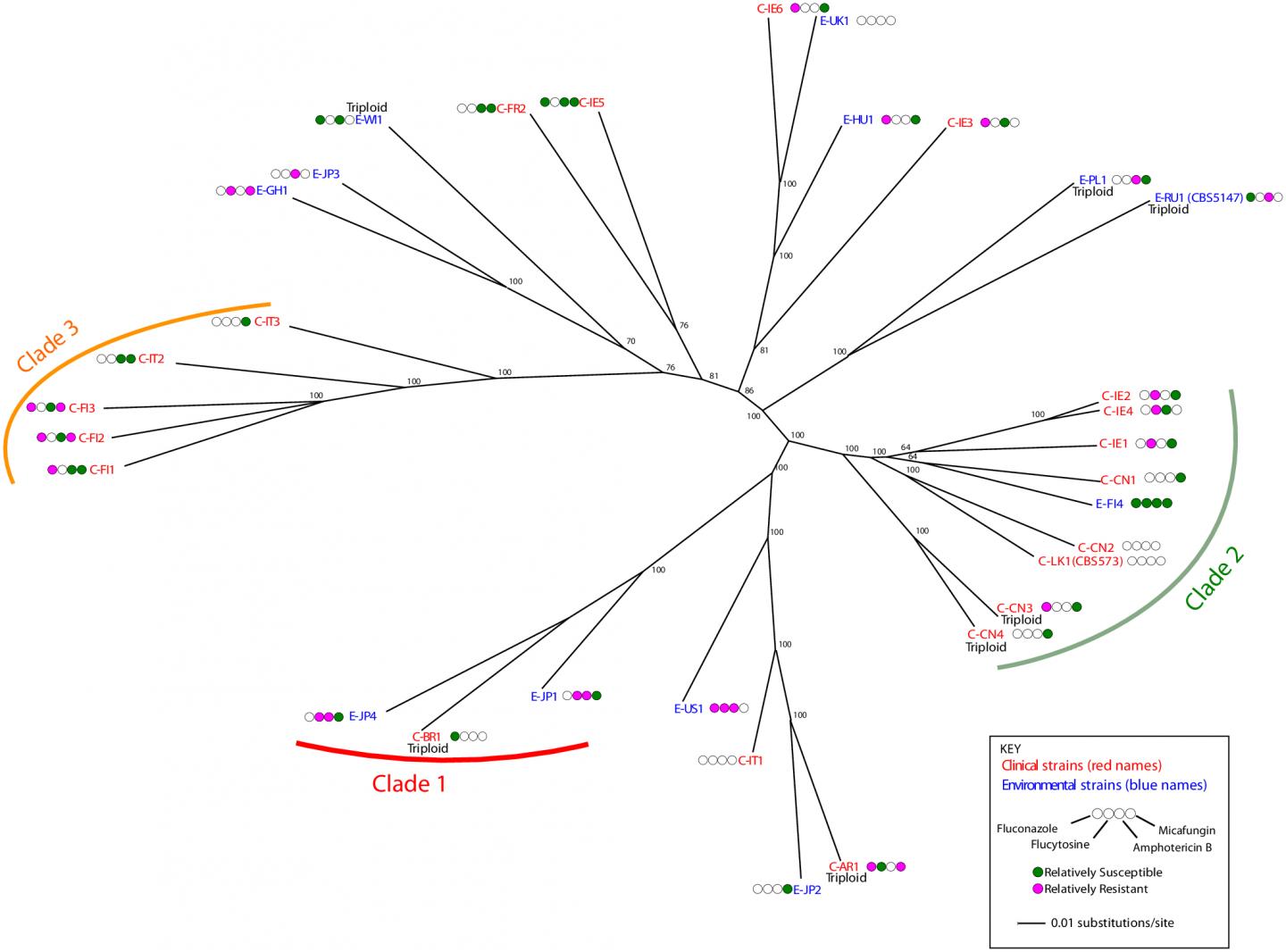 A phylogenetic tree of strains was constructed from data from a filtered set of 150,306 SNP sites, using RRHS and Maximum Likelihood (see Methods). Branch supports represent pseudo-bootstrap values. Strains named in red are clinical isolates, and strains named in blue are environmental. For each strain, four circles indicate relative resistance (magenta) or relative sensitivity (green) to four drugs as shown in the key.

A major cause of drug-resistant clinical yeast infections is the same species previously regarded as non-pathogenic and commonly used in the biotechnology and food industries. The study, published on July 19th in the open-access journal PLOS Pathogens, was led by Alexander Douglass of University College Dublin in Ireland.

Candida krusei is a drug-resistant yeast species and one of the five most prevalent causes of clinical yeast infections. It responsible for significant levels of morbidity and mortality in immunocompromised patients. By contrast, a yeast species called Pichia kudriavzevii has been considered to be safe because it has been used for centuries to make food products such as fermented cassava and cacao, fermented milk, and maize beverages. It also has a growing role in biotechnology for the production of bioethanol and high-value chemicals. But to date, relatively little genetic or genomic investigation has been carried out on strains of C. krusei and P. kudriavzevii.

To address this gap in knowledge, Douglass and colleagues sequenced the genomes of 30 clinical and environmental strains of these two species. The results show conclusively that they are the same species, with genomes that are 99.6% identical in DNA sequence. Moreover, the two species show similar levels of resistance to antifungal drugs. The findings suggest that industrial yeast strains are capable of causing disease in humans, and caution may be needed in the use of drug-resistant P. kudriavzevii strains for biotechnology and food applications.

“It may be advisable to consider non-pathogenic Pichia species as possible alternatives for some industrial applications,” Douglass said. “It would also be advisable to set limits on the levels of drug-resistance permissible in P. kudriavzevii strains that are used in industry, particularly the food industry.”