‘Am I Stoned’ app designed to help users understand their impairment 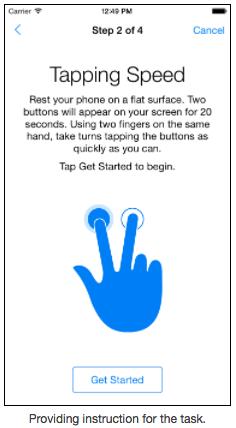 IMAGE: A test of tapping speed helps app users assess their level of impairment from marijuana use.

Although cannabis, also known as marijuana, has been shown to impair memory, reaction time and attention, it is difficult to assess this impairment in a natural setting. Researchers have developed a prototype app called ‘Am I Stoned’ that could help cannabis users understand how the drug is affecting them through a series of phone-based tasks.

Elisa Pabon, a doctoral student at the University of Chicago, will present results from initial testing of the app at the American Society for Pharmacology and Experimental Therapeutics annual meeting during the 2018 Experimental Biology meeting to be held April 21-25 in San Diego.

“One of our long-term goals is for the app to improve the safety of cannabis use by making individual users more aware of their impairment,” said research team leader Harriet de Wit, professor in the Department of Psychiatry and Behavioral Neuroscience at the University of Chicago. “By gathering data from users in the field, the app will also contribute to the overall scientific knowledge in terms of how cannabis affects users.”

As a step towards developing a mobile phone app that could be used in a natural environment, the researchers examined the usefulness of various tasks in assessing impairment in a controlled laboratory environment. They asked 24 healthy non-daily cannabis users to consume a capsule containing a placebo or 7.5 or 15 milligrams of tetrahydrocannabinol (THC), the ingredient in cannabis that makes people high. The study participants then completed standardized computer-based tasks known to detect impairment as well as app-based tasks on an iPhone, which could be used for briefer assessments outside of the laboratory. Neither the participants nor the researchers knew who received the placebo and who received THC.

The researchers successfully detected impairments from THC using three of the four computer tasks and one of the iPhone tasks. The study also showed that users were generally aware of their impairment.

“The effects of THC on performance may be subtle, so we need highly sensitive tasks to detect impairments,” said Pabon. “It is likely that the computer tasks, which took 15 to 20 minutes to complete, were more sensitive to THC impairment because they provided more opportunity to detect a drug effect.”

Although the app is not intended to predict a person’s ability to drive or engage in activities that may cause harm, the researchers do plan to use what they are learning to develop an app that people can use to assess their own performance. This would require a person to complete the tasks when sober to provide personalized baseline information that could be used in the future to assess their level of impairment after using cannabis.

The researchers plan to use the findings from this study to improve the sensitivity of the app-based tasks to detect THC-induced impairment so that they can eventually deploy the app in a more naturalistic setting.

This study was funded by National Institute of Drug Abuse.

Experimental Biology is an annual meeting comprised of more than 14,000 scientists and exhibitors from five host societies and multiple guest societies. With a mission to share the newest scientific concepts and research findings shaping clinical advances, the meeting offers an unparalleled opportunity for exchange among scientists from across the United States and the world who represent dozens of scientific areas, from laboratory to translational to clinical research. http://www.experimentalbiology.org #expbio

About the American Society for Pharmacology and Experimental Therapeutics (ASPET)

ASPET is a 5,000 member scientific society whose members conduct basic and clinical pharmacological research within the academic, industrial and government sectors. Our members discover and develop new medicines and therapeutic agents that fight existing and emerging diseases, as well as increase our knowledge regarding how therapeutics affects humans. http://www.aspet.org