Bipartisan users, who try to bridge the echo chambers, need to pay a price for their work: They become less central in their own network, lose connections to their communities and receive less endorsements from other users 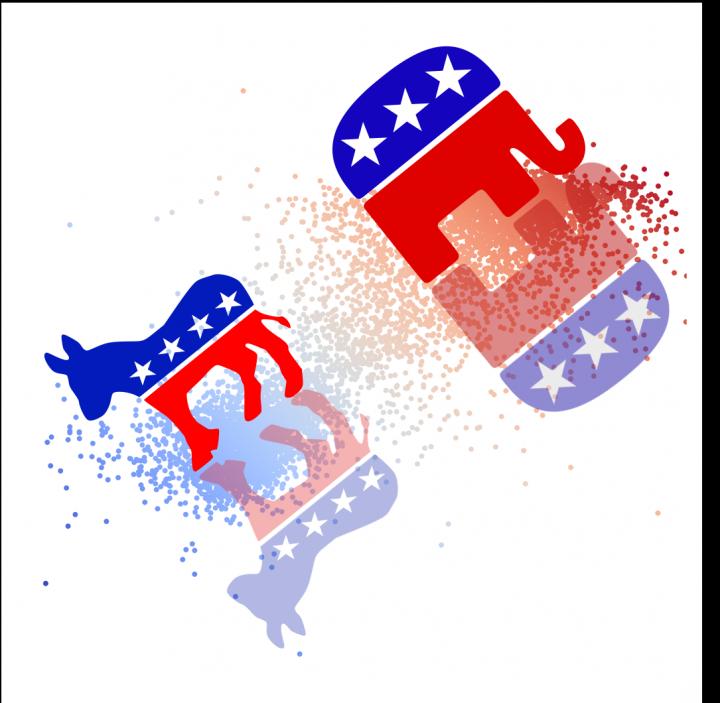 IMAGE: The scatterplots display how the polarization on the topic of Obamacare content is distributed among Twitter users. Blue dots represent Democrats, and red Republicans.

Bipartisan users, who try to bridge the echo chambers, need to pay a price for their work: they become less central in their own network, lose connections to their communities and receive less endorsements from other users.

A recent study of more than 2.7 billion tweets between 2009 and 2016 confirms that Twitter users are exposed mainly to political opinions that agree with their own. It is the largest study to characterise echo chambers by both the content in them and the networks they comprise. The findings indicate a strong correlation between biases in the content people both produce and consume. In other words, echo chambers are very real on Twitter.

The study identifies three essential roles for Twitter users. Partisan users both consume and produce content with only a one-sided leaning and enjoy high appreciation measured by both network centrality and content endorsement. Gatekeepers have a central role in the formation of echo chambers because they consume content with diverse leanings but choose to produce only content with a one-sided leaning. Bipartisan users produce content with both leanings and make an effort to bridge the echo chambers, but they are less valued in their networks than their partisan counterparts.

The researchers from Aalto University, University of Helsinki and Qatar Computing Research Institute have created machine learning algorithms to predict the roles of users in several datasets. They were able to predict partisan users with nearly 80% accuracy and gatekeepers with 70% accuracy based on their tweets and network. Network centrality was measured in the underlying social network of Twitter users, and endorsement was measured in terms of the number of times a user’s message is either re-posted or rated positively by other users in the network.

‘Gatekeepers are a small group of users who have higher than average network centrality. However, the users that gatekeepers follow are not always connected with each other; instead, they belong to opposing sides. Finding and connecting the gatekeepers would help spread information to both sides, even though they are more challenging to identify than partisan users,’ explains postdoctoral researcher Kiran Garimella, currently working at EPFL in Lausanne.

The price to pay for being bipartisan was studied for the first time on social networks. Producing content that expresses opinions aligned with both sides of a political divide has a price in terms of various aspects including network position, community connections, and content endorsement.

‘In other words, the content produced by bipartisan users receives less attention – their tweets are re-posted less frequently by other users,’ says professor Michael Mathioudakis from the University of Helsinki.

For all the datasets, in order to ensure that bot accounts were not included in the study, the researchers removed accounts with less than one year of activity at the time of data collection or with any abnormal features, such as suspiciously high number of connections.

‘The study was aimed at understanding the interplay between the structure of echo chambers and the role of Twitter users on a scale larger than ever before,’ adds Garimella.

‘Our motivation was to understand how the social media users perceive the world through their Twitter feed. In future work, we are going to look more closely into different user roles and try to understand who are the users that shape online debates and how, adds Mathioudakis.

The study is presented at this year’s international Web Conference (WWW2018) in Lyon, France.