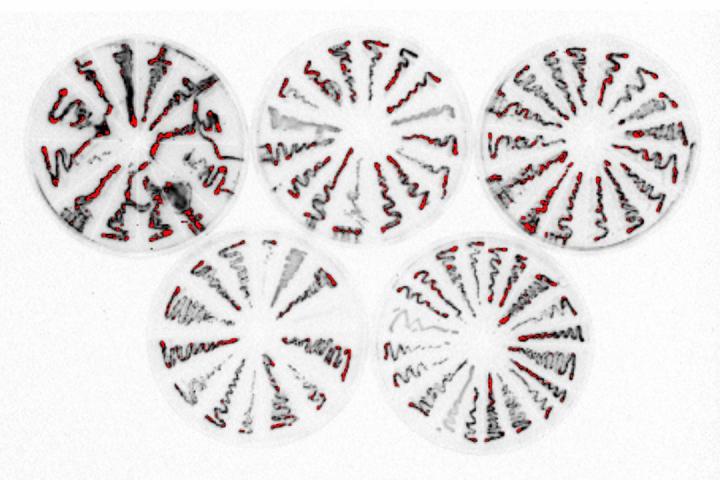 In mice, some common acid reflux medications promote growth of Enterococcus bacteria (like those shown here artificially glowing red in a petri dish) in the intestines. These bacteria also translocate to the liver, where they exacerbate inflammation and worsen chronic liver disease.

Approximately 10 percent of the general population take a proton pump inhibitor (PPI) drug to block stomach acid secretions and relieve symptoms of frequent heartburn, acid reflux and gastroesophageal reflux disease. That percentage can be as much as seven times higher for people with chronic liver disease. Researchers at University of California San Diego School of Medicine have discovered evidence in mice and humans that stomach (gastric) acid suppression alters specific gut bacteria in a way that promotes liver injury and progression of three types of chronic liver disease.

The study is published October 10 in Nature Communications.

“Our stomachs produce gastric acid to kill ingested microbes, and taking a medication to suppress gastric acid secretion can change the composition of the gut microbiome,” said senior author Bernd Schnabl, MD, associate professor of gastroenterology at UC San Diego School of Medicine. “Since we found previously that the gut microbiome — the communities of bacteria and other microbes living there — can influence liver disease risk, we wondered what effect gastric acid suppression might have on the progression of chronic liver disease. We found that the absence of gastric acid promotes growth of Enterococcus bacteria in the intestines and translocation to the liver, where they exacerbate inflammation and worsen chronic liver disease.”

Liver cirrhosis is the 12th leading cause of death worldwide and the number of people with chronic liver disease is increasing rapidly in Western countries. The increase is partly due to the rising prevalence of obesity, which is associated with non-alcoholic fatty liver disease (NAFLD) and steatohepatitis (NASH). Approximately half of all cirrhosis-associated deaths are related to alcohol.

PPIs, which include brand names such as Prilosec, Nexium and Prevacid, are among the most commonly prescribed medications in the world, particularly among people with chronic liver disease. They are also relatively inexpensive medications, retailing for approximately $7 for a recommended two-week course of generic, over-the-counter Prilosec (omeprazole). But the frequency of use adds up — one study estimates Americans spend $11 billion on PPIs each year.

To determine the effect of gastric acid suppression on the progression of chronic liver disease, Schnabl’s team looked at mouse models that mimic alcoholic liver disease, NAFLD and NASH in humans. In each, they blocked gastric acid production either by genetic engineering or with a PPI (omeprazole/Prilosec). They sequenced microbe-specific genes collected from the animals’ stool to determine the gut microbiome makeup of each mouse type, with or without blocked gastric acid production.

The researchers found that mice with gastric acid suppression developed alterations in their gut microbiomes. Specifically, they had more Enterococcus species of bacteria. These changes promoted liver inflammation and liver injury, increasing the progression of all three types of liver disease in the mice: alcohol-induced liver disease, NAFLD and NASH.

The team also examined the link between PPI usage and alcoholic liver disease among people who abuse alcohol. They analyzed a cohort of 4,830 patients with a diagnosis of chronic alcohol abuse — 1,024 (21 percent) were active PPI users, 745 (15 percent) were previous users and 3061 (63 percent) had never used PPIs.

The researchers noted that PPI intake among these patients increased stool concentrations of Enterococcus. What’s more, the 10-year risk of a diagnosis of alcoholic liver disease was 20.7 percent for active users of PPIs, 16.1 percent for previous users and 12.4 percent for never users. In other words, the rate of liver disease in people who chronically abuse alcohol was 8.3 percent higher for those who actively use PPIs compared to those who never used the acid-blocking medications.

While this study relies upon mouse models and a patient database, and a large, randomized, controlled clinical trial would be needed to definitively show causality between PPI usage and risk of chronic liver disease in humans, Schnabl said the initial data should at least get people thinking about reducing their use of PPIs in cases where they aren’t a necessity.

There are inexpensive and readily available alternatives to PPIs. However, even non-PPI-based antacids (e.g., Pepto-Bismol, Tums, or H2 blockers such as Tagamet and Zantac) still suppress gastric acid to a lesser degree. While these other types of antacids were not tested in this study, Schnabl said any medication that suppresses gastric acid effectively could cause changes in gut bacteria and thus potentially affect the progression of chronic liver disease. Alternatively, non-pharmacological methods for managing heartburn are an option for some patients, including losing weight and reducing intake of alcohol, caffeine, and fatty and spicy foods.

“Our findings indicate that the recent rise in use of gastric acid-suppressing medications might have contributed to the increased incidence of chronic liver disease,” Schnabl said. “Although obesity and alcohol use predispose a person to acid reflux requiring antacid medication, many patients with chronic liver disease take gastric acid suppressive medications without appropriate indication. We believe clinicians should consider withholding medications that suppress gastric acid unless there is a strong medical indication.”

This new information might also provide a new therapeutic avenue researchers could explore as a means to reduce risk of liver injury in some people.

“We might someday be able to manipulate the gut microbiome, and in particular Enterococcus faecalis, to attenuate alcohol-related liver disease associated with gastric acid suppression,” Schnabl said.