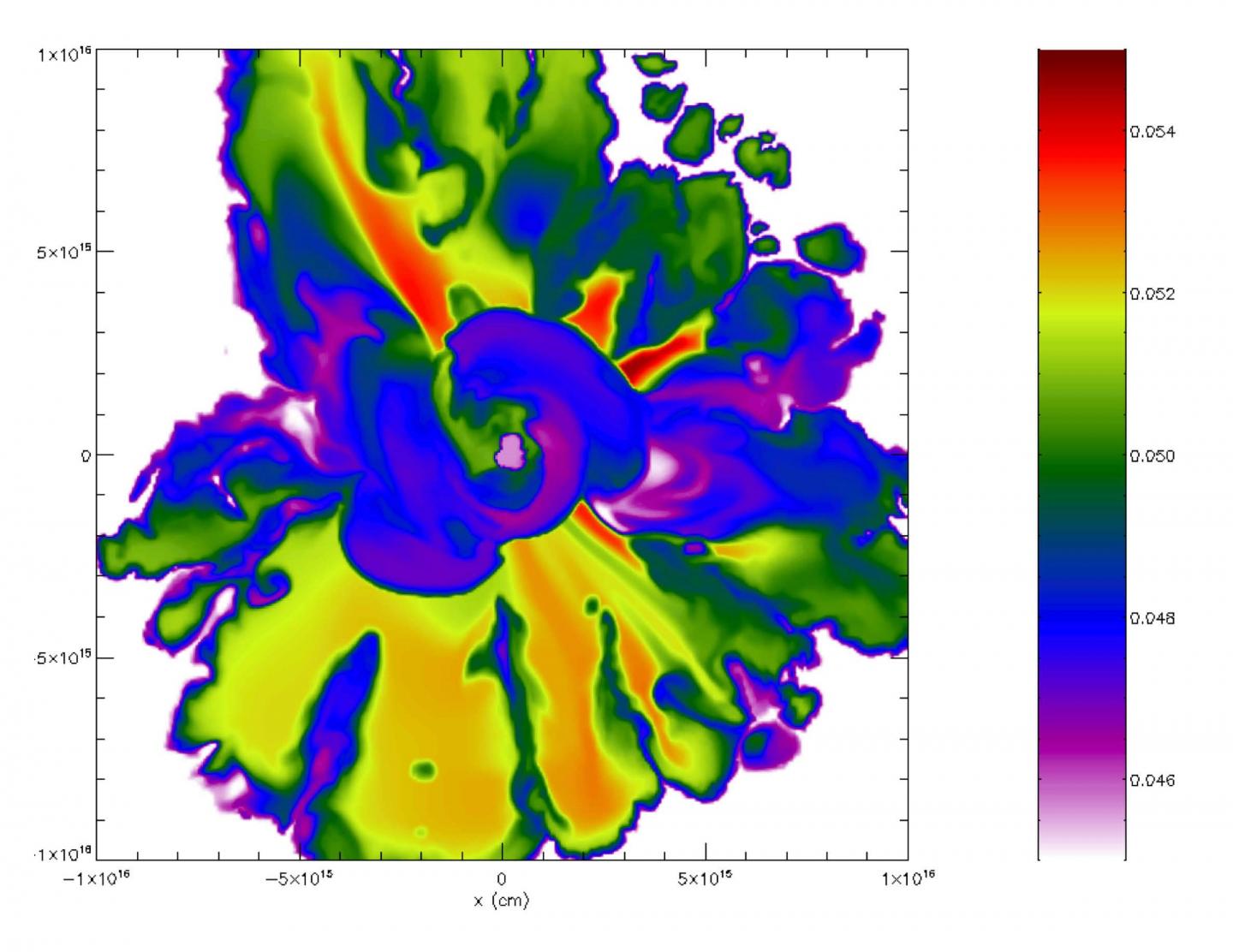 The colors represent the relative amounts of short-lived radioactive isotopes, such as iron-60, injected into a newly formed protoplanetary disk (seen face on with the protostar being the light purple blob in the middle) by a supernova shock wave.

Washington, DC– According to one longstanding theory, our Solar System’s formation was triggered by a shock wave from an exploding supernova. The shock wave injected material from the exploding star into a neighboring cloud of dust and gas, causing it to collapse in on itself and form the Sun and its surrounding planets.

New work from Carnegie’s Alan Boss offers fresh evidence supporting this theory, modeling the Solar System’s formation beyond the initial cloud collapse and into the intermediate stages of star formation. It is published by the Astrophysical Journal.

One very important constraint for testing theories of Solar System formation is meteorite chemistry. Meteorites retain a record of the elements, isotopes, and compounds that existed in the system’s earliest days. One type, called carbonaceous chondrites, includes some of the most-primitive known samples.

An interesting component of chondrites’ makeup is something called short-lived radioactive isotopes. Isotopes are versions of elements with the same number of protons, but a different number of neutrons. Sometimes, as is the case with radioactive isotopes, the number of neutrons present in the nucleus can make the isotope unstable. To gain stability, the isotope releases energetic particles, which alters its number of protons and neutrons, transmuting it into another element.

Some isotopes that existed when the Solar System formed are radioactive and have decay rates that caused them to become extinct within tens to hundreds of million years. The fact that these isotopes still existed when chondrites formed is shown by the abundances of their stable decay products–also called daughter isotopes–found in some primitive chondrites. Measuring the amount of these daughter isotopes can tell scientists when, and possibly how, the chondrites formed.

A recent analysis of chondrites by Carnegie’s Myriam Telus was concerned with iron-60, a short-lived radioactive isotope that decays into nickel-60. It is only created in significant amounts by nuclear reactions inside certain kinds of stars, including supernovae or what are called asymptotic giant branch (AGB) stars.

Because all the iron-60 from the Solar System’s formation has long since decayed, Telus’ research, published in Geochimica et Cosmochimica Acta, focused on its daughter product, nickel-60. The amount of nickel-60 found in meteorite samples–particularly in comparison to the amount of stable, “ordinary” iron-56–can indicate how much iron-60 was present when the larger parent body from which the meteorite broke off was formed. There are not many options for how an excess of iron-60–which later decayed into nickel-60–could have gotten into a primitive Solar System object in the first place–one of them being a supernova.

While her research did not find a “smoking gun,” definitively proving that the radioactive isotopes were injected by a shock wave, Telus did show that the amount of Fe-60 present in the early Solar System is consistent with a supernova origin.

Taking this latest meteorite research into account, Boss revisited his earlier models of shock wave-triggered cloud collapse, extending his computational models beyond the initial collapse and into the intermediate stages of star formation, when the Sun was first being created, an important next step in tying together Solar System origin modeling and meteorite sample analysis.

“My findings indicate that a supernova shock wave is still the most-plausible origin story for explaining the short lived radioactive isotopes in our Solar System,” Boss said.

Boss dedicated his paper to the late Sandra Keiser, a long-term collaborator, who provided computational and programming support at Carnegie’s Department of Terrestrial Magnetism for more than two decades. Keiser died in March.

The software used in this research was in large part developed by the DOE-supported ASC/Alliances Center for Astrophysical Thermonuclear Flashes at the University of Chicago.

The Carnegie Institution for Science (carnegiescience.edu) is a private, nonprofit organization headquartered in Washington, D.C., with six research departments throughout the U.S. Since its founding in 1902, the Carnegie Institution has been a pioneering force in basic scientific research. Carnegie scientists are leaders in plant biology, developmental biology, astronomy, materials science, global ecology, and Earth and planetary science.