The fading American dream: Economic mobility has nearly halved since 1940

American Association for the Advancement of Science 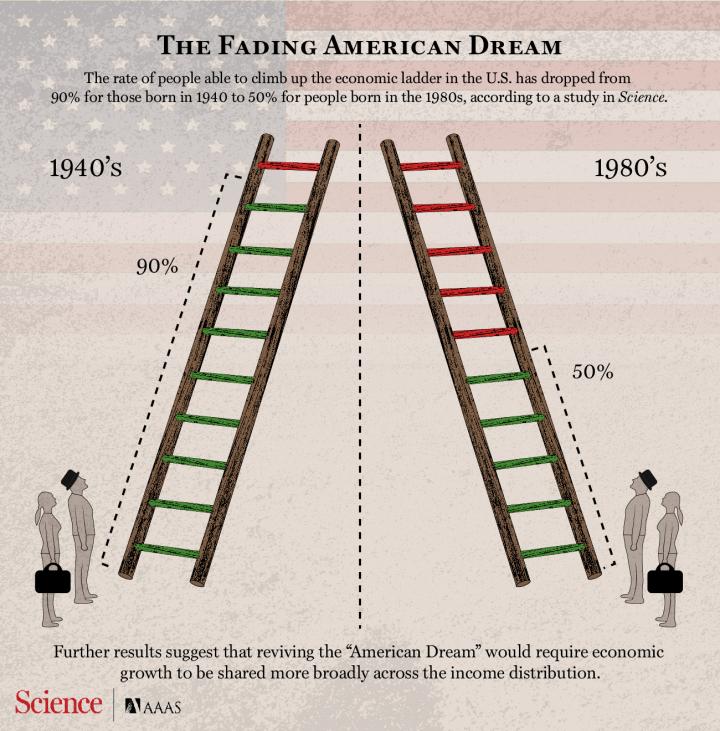 An infographic conveying results by Chetty et al., which reveal that the probability for children to attain a higher income than their parents has dropped dramatically — from more than 90 percent for children born in 1940 to 50 percent for children born in the 1980s. This material relates to a paper that appeared in the 28 April 2017, issue of Science, published by AAAS. The paper, by R. Chetty at Stanford University in Stanford, CA, and colleagues was titled, ‘The fading American dream: Trends in absolute income mobility since 1940.’

The probability for children to attain a higher income than their parents has dropped dramatically – from more than 90% for children born in 1940 to 50% for children born in the 1980s – according to a new study analyzing U.S. data. Results reveal that restoring economic mobility would require, in part, more equal economic redistribution. The “American Dream” promises that hard work and opportunity will lead to a better life, and that even those born to low-income families can “rise above the ranks” with sufficient effort. Despite much interest in economic mobility, however, studying it over generations remains challenging, mainly because of the lack of large, high-quality datasets in the U.S. linking children to their parents. To overcome these gaps in data, Raj Chetty et al. took a sophisticated approach that combines data from United States Census and Current Population Survey with tax records, adjusting for inflation and other confounding variables. They found that the fraction of children earning more than their parents fell from 92% in the 1940 birth cohort to 50% in the 1984 birth cohort. Economic mobility fell most sharply in the industrial Midwest (e.g., Indiana, Illinois), while the smallest declines occurred in states such as Massachusetts, New York, and Montana. One possible explanation would be that the GDP growth rate has declined over more recent decades; yet when the researchers modelled the 1980s cohort with the same GDP growth rate seen in the 1940s, absolute mobility only rose from 50% to 62%. In contrast, when the researchers modelled the 1980s cohort with the same economic distribution seen in the 1940s, the rate of absolute mobility rose to 80%. Together, these simulations show that increasing GDP growth without changing the current distribution of growth would only have modest effects on rates of absolute mobility, the authors say.

In a related Policy Forum, Lawrence F. Katz and Alan B. Krueger discuss the results from Chetty et al., elaborating on policies and actions that can be taken to achieve greater economic redistribution. In essence, they characterize five classes of policy interventions to consider: fostering faster productivity growth, raising human capital, raising wages and employment of low-income households, updating taxes and transfers, and making place-based policies to address geographic mobility. They provide numerous examples of how to achieve each of these goals, including but not limited to: offering universal preschool; improving recruitment, retention, and professional development of teachers; offering greater access to public universities; increasing the minimum wage; increasing the generosity of the Earned Income Tax Credit overall, but particularly for low-income workers without dependent children; and expanding access to housing vouchers for low-income families with young children.