University of Pennsylvania School of Medicine 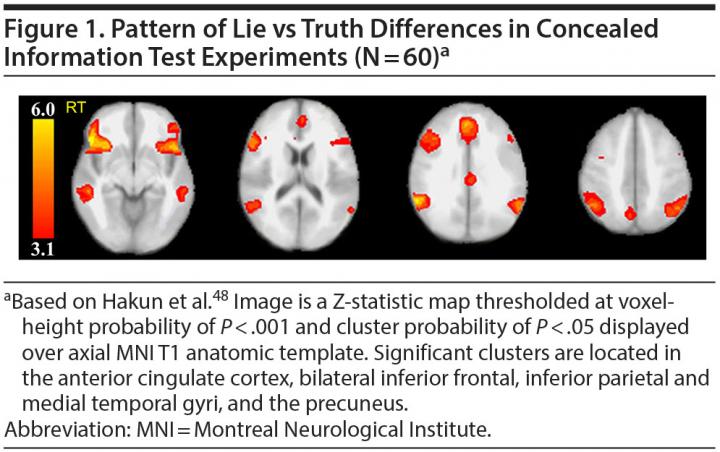 Credit: Perelman School of Medicine at the University of Pennsylvania/Journal of Clinical Psychiatry

PHILADELPHIA – When it comes to lying, our brains are much more likely to give us away than sweaty palms or spikes in heart rate, new evidence from researchers in the Perelman School of Medicine at the University of Pennsylvania suggests. The study, published in the Journal of Clinical Psychiatry, found that scanning people’s brains with fMRI, or functional magnetic resonance imaging, was significantly more effective at spotting lies than a traditional polygraph test.

It has been demonstrated that when someone is lying, areas of the brain linked to decision-making are activated, which lights up on an fMRI scan for experts to see. While laboratory studies showed fMRI’s ability to detect deception with up to 90 percent accuracy, estimates of polygraphs’ accuracy ranged wildly, between chance and 100 percent, depending on the study. The Penn study was the first to compare the two modalities in the same individuals in a blinded and prospective fashion. The approach adds scientific data to the long-standing debate about this technology and builds the case for more studies investigating its potential real-life applications, such as evidence in the criminal legal proceedings.

Researchers from Penn’s departments of Psychiatry and Biostatistics and Epidemiology found that neuroscience experts without prior experience in lie detection, using fMRI data, were 24 percent more likely to detect deception than professional polygraph examiners reviewing polygraph recordings. In both fMRI and polygraph, participants took a standardized “concealed information” test.

Polygraph, the only physiological lie detector in worldwide use since it was introduced in its present form more than 50 years ago, monitors individuals’ electrical skin conductivity, heart rate, and respiration during a series of questions. Polygraph is based on the assumption that incidents of lying are marked by upward or downward spikes in these measurements. Despite having been deemed inadmissible as legal evidence in most jurisdictions in the United States or for pre-employment screening in the private sector for almost 30 years, polygraph is widely used for government background checks and security clearances.

“Polygraph measures reflect complex activity of the peripheral nervous system that is reduced to only a few parameters, while fMRI is looking at thousands of brain clusters with higher resolution in both space and time. While neither type of activity is unique to lying, we expected brain activity to be a more specific marker, and this is what I believe we found,” said the study’s lead author, Daniel D. Langleben, MD, a professor of Psychiatry.

To compare the two technologies, 28 participants were given the so-called “Concealed Information Test” (CIT). CIT is designed to determine whether a person has specific knowledge by asking carefully constructed questions, some of which have known answers, and looking for responses that are accompanied by spikes in physiological activity. Sometimes referred to as the Guilty Knowledge Test, CIT has been developed and used by polygraph examiners to demonstrate the effectiveness of their methods to subjects prior to the actual polygraph examination.

In the Penn study, a polygraph examiner asked participants to secretly write down a number between three and eight. Next, each person was administered the CIT while either hooked to a polygraph or lying inside an MRI scanner. Each of the participants had both tests, in a different order, a few hours apart. During both sessions, they were instructed to answer “no” to questions about all the numbers, making one of the six answers a lie. The results were then evaluated by three polygraph and three neuroimaging experts separately and then compared to determine which technology was better at detecting the fib.

In one example in the paper, fMRI clearly shows increased brain activity when a participant, who picked the number seven, is asked if that is their number. Experts who studied the polygraph counterpart incorrectly identified the number six as the lie. The polygraph associated with the number six shows high peaks after the participant is asked the same questions several times in a row, suggesting that answer was a lie. The scenario was reversed in another example, as neither fMRI nor polygraph experts were perfect, which is demonstrated in the paper. However, overall, fMRI experts were 24 percent more likely to detect the lie in any given participant.

Beyond the accuracy comparison, authors made another important observation. In the 17 cases when polygraph and fMRI agreed on what the concealed number was, they were 100 percent correct. Such high precision of positive determinations could be especially important in the United States and British criminal proceedings, where avoiding false convictions takes absolute precedence over catching the guilty, the authors said. They cautioned that while this does suggest that the two modalities may be complementary if used in sequence, their study was not designed to test combined use of both modalities and their unexpected observation needs to be confirmed experimentally before any practical conclusions could be made.

“While the jury remains out on whether fMRI will ever become a forensic tool, these data certainly justify further investigation of its potential,” Langleben said.

Penn Medicine is one of the world’s leading academic medical centers, dedicated to the related missions of medical education, biomedical research, and excellence in patient care. Penn Medicine consists of the Raymond and Ruth Perelman School of Medicine at the University of Pennsylvania(founded in 1765 as the nation’s first medical school) and the University of Pennsylvania Health System, which together form a $5.3 billion enterprise.

The Perelman School of Medicine has been ranked among the top five medical schools in the United States for the past 18 years, according to U.S. News & World Report’s survey of research-oriented medical schools. The School is consistently among the nation’s top recipients of funding from the National Institutes of Health, with $373 million awarded in the 2015 fiscal year.

Penn Medicine is committed to improving lives and health through a variety of community-based programs and activities. In fiscal year 2015, Penn Medicine provided $253.3 million to benefit our community.