Malaysian authorities announced on Sunday that the identities of a further two passengers supposedly on board missing flight MH370 flight were being probed, after a pair of tickets were earlier found to have been booked using stolen passports.

The entire passenger list was today under scrutiny as Malaysian officials worked with counter terrorism units and the FBI to verify the identities of all 239 people on board the flight.

Investigations into exactly who was on board continued as Malaysian military officials said radar records indicated that the flight had turned back towards Kuala Lumpur before it vanished.

Rodzali Daud, the Royal Malaysian Air Force chief, said: “What we have done is actually look into the recording on the radar that we have and we realised there is a possibility the aircraft did make a turnback.”

Malaysian rescue teams this morning expanded the search for the flight, which was carrying 227 passengers and 12 crew, to the country’s west coast. 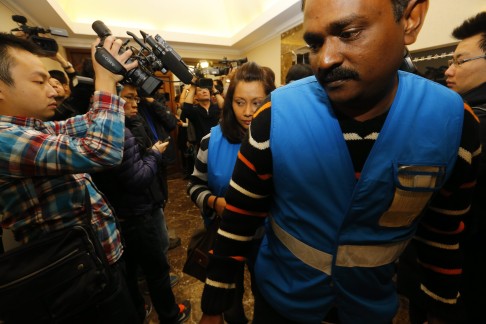 Members of a Special Assistance Team from Malaysia (wearing blue vests) arrive at a hotel where relatives of passengers of a missing Malaysia Airlines plane are meeting in Beijing, China. Photo: EPA

The flight, carrying 227 passengers and 12 crew, is presumed to have crashed on Saturday, after losing contact with air traffic controllers.

Five children aged from two to four years – two from the United States and three from China – were among the passengers, along with two French teenagers aged 14 and 17. The eldest flyer was a 79-year-old Chinese national.

The airline said Sunday it was working with a disaster recovery management specialist from the US as it resumed the desperate search for the vanisher airliner. The company said that ‘in fearing the worst’, it had taken on the squad of experts to assist ‘in this crucial time’.

On Saturday evening, it emerged that two tickets to the flight had been purchased using stolen passports.

As the clock ticked past the 24-hour mark and hopes of finding survivors diminished, authorities revealed that two people named on a list of passengers were not on the plane, and that both had had their passports stolen in Thailand. 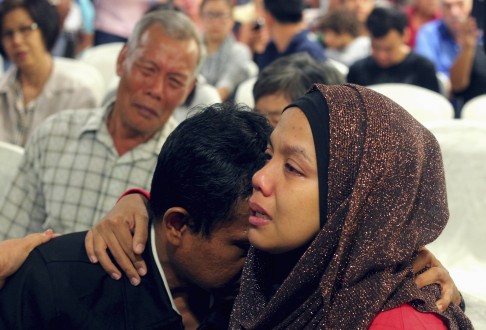 Family members of those onboard the missing Malaysia Airlines flight MH370 cry at a hotel in Putrajaya. Photo: Reuters

The revelations came as Malaysia Airlines said a “Go team” had been sent to Beijing to assist frightened family members of the passengers.

Azaharudin Abdul Rahman, deputy chief of Malaysia’s Civil Aviation Authority, said on Sunday morning that three aircraft searching the site had still not yet located any sign of the plane.

In a statement the airline said: “More than 24 hours after the loss of contact with Malaysia Airlines Flight MH370, the search and rescue teams are still unable to detect the whereabouts of the missing aircraft.”

The airline earlier said all information was being fed to families of the those on board “as and when we receive it”.

“As many families of passengers are in China, we have deployed our ‘Go Team’ to Beijing with a team of caregivers and volunteers to assist the family members of the passengers,” the company said. 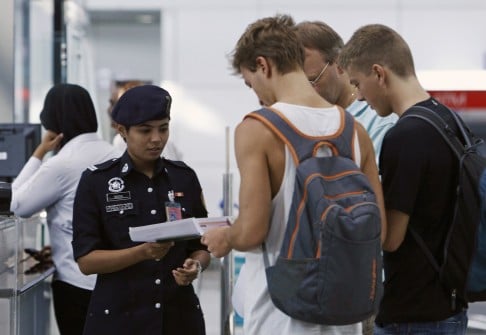 Two Chinese warships and one other naval vessel have been scrambled to the scene, according to Xinhua.

Foreign ministry officials in Rome and Vienna confirmed on Saturday night that the names of two nationals listed on the manifest of the flight matched those of passports reported stolen in Thailand.

Italian foreign ministry officials said that Luigi Maraldi, originally believed to have boarded the plane in Kuala Lumpur, was traveling in Thailand when the Beijing-bound flight took off at just after midnight on Friday.

He had reported his passport stolen last August, said a foreign ministry functionary, who spoke on condition of anonymity. 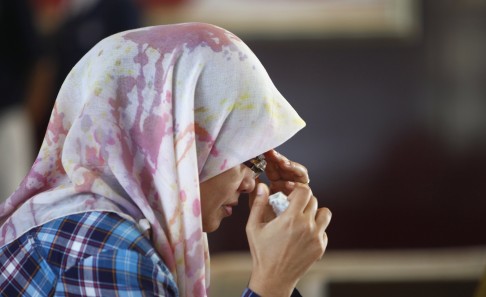 Arni Marlina, a family member of a passenger onboard the missing Malaysia Airlines flight MH370, cries at a hotel in Putrajaya. Photo: Reuters

Italian news agency ANSA says Maraldi called home after hearing reports that someone with his name was on the plane.

“He is alright, he is on vacation, on the beach,” his mother told the Italian national TV broadcaster RAI.

The revelations will raise questions over security at Kuala Lumpur’s airport, and how the stolen passports were able to be used by people other than their rightful owners.

China Southern, who jointly shared the route with Malaysian Airlines in what is termed in the industry a ‘code share’, said in a statement it had sold tickets to one Austrian and one Italian.

The airline confirmed it had sold seven tickets in all, including one to a Chinese passenger, one Dutch, 2 Ukranian and one Malaysian.

Vietnamese authorities said Saturday night that planes searching for the jet had spotted two oil slicks “15 to 20 kilometres long” off the southern tip of the country and that they were sending boats to investigate.

Meanwhile a photo circulated on weibo by a Chinese banker on a flight from Beijing to Kuala Lumpur was touted as a possible sighting of debris floating on the sea.

A total of 239 people were on board the flight when it vanished two hours after taking off from Kuala Lumpur. Twelve crew members and 227 passengers, aged two to 79 years, were named on a list of those on board released by the airline.

The Boeing 777-200ER gave air traffic controllers no indication of any problem before vanishing from radar screens.

An air search for survivors was called off on Saturday night and will resume at daylight.

Vietnamese officials said planes had spotted twin oil slicks in the sea and were sending boats to investigate.

This article appeared in the South China Morning Post print edition as Search for missing plane is expanded to Malaysia’s west coast.
http://www.scmp.com/news/asia/article/1443908/passenger-list-centre-missing-malaysia-airlines-probe-radar-shows-flight