Residents cover their faces they ride their bicycles along a street on a smoggy day in Zhengzhou, Henan province. Photo: Reuters

Scientists are researching whether pumping super-cold gas into Beijing’s atmosphere can help reduce air pollution in the capital.

He Hui, a researcher at the government’s Beijing Weather Modification Office, said liquid nitrogen, an industrial coolant nearly three times as cold as dry ice, was promising as an anti-smog agent though it was in the early stages of development.

The government-funded research involves pumping the gas from large tanks into the air as a fine mist at least 10 metres above ground.

Crystals form on the small particles of dust and other pollutants, which then fall to the ground. The belt of cooler air, less than 20 metres thick, also stops polluted air above reaching street level. The researchers said that during colder weather the belt, rich in vaporised liquid nitrogen, could remain hanging in the atmosphere for several hours.

Beijing Vice-Mayor Lin Keqing said this week that the city was investigating the use of technology to combat the capital’s smog, but did not elaborate.

Conventional methods include seeding clouds with chemicals to create rain or snow to wash out air pollutants.

Cloud seeding was used ahead of the Beijing Olympics in 2008. But using aircraft to deploy enormous amounts of chemicals over the capital could prove costly and its efficiency is reduced in winter, a season with a higher frequency of smog in the north.

He’s team was given 250,000 yuan (HK$317,000) by the National Natural Science Foundation last year to carry out computer simulations of how various chemical agents might help clean the air. Other agencies, which He declined to name, funded the liquid nitrogen experiments. This had proved the most promising research, he said.

“Our experiments showed that in an environment with temperatures below freezing point, liquid nitrogen outperformed all other agents, but in summer or autumn its effect was less obvious,” He said. Other scientists have questioned whether this can be done safely. 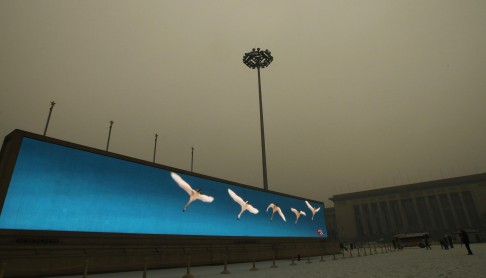 A giant TV screen in a smoggy Tiananmen Square shows cranes flying in a clear blue sky. Beijing is continuing a search for ways to combat its polluted air. Photo: Simon SongDr Wang Xinfeng, a researcher in atmospheric chemistry at Shandong University in Jinan , said the use of liquid nitrogen was unprecedented, innovative and backed by basic science, but the technology must be handled with care.

“It is possible in theory to create a smog-free zone with liquid nitrogen and a shield against air pollutants with man-made cold, but even in laboratories we handle liquid nitrogen with care due to its extremely low temperature,” he said.

The liquid vaporised quickly when exposed to air and even a tiny spill on exposed skin or thin cloth could cause serious cold burns, Wang said.

If the agent was released at a point more than five floors high and at a very low speed, it would not cause harm to people on the ground, Wang said.

Another potential problem in using liquid nitrogen is wind.

“Small winds in different directions can alter our data quite significantly,” said researcher He.

Fu Zuntao, a professor at Peking University, said the government had spent a lot on weather manipulation research that was often not publicised.

Like Loading...
‹ Merkel compares NSA to ‘Stasi police’ in heated exchange with Obama
$1,000 BOUNTY offered for FINGERPRINTS of a GLOBAL SPY CHIEF ›