The British government is facing a public backlash after it emerged that China, the world’s second-largest economy, received millions of pounds in aid – despite the fact it had just funded a lavish space mission.

The revelations sparked angry calls for a probe into why cash-strapped Britain was giving so much financial assistance to “wealthy China”.

“The public will be rightly horrified that we are still wasting money on aid to China,” Tory parliament member Peter Bone told the Daily Mail, which obtained and published the figures.

The findings also contradict ministerial assurances made in 2011 that 16 countries – including China – would no longer receive aid, following a review.

Bone called on Justine Greening, the international development secretary, to explain why British money was still going to Beijing.

He added: “It’s extraordinary that we are doing this while they send a mission to the moon. 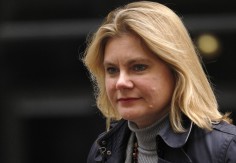 Britain’s International Development Secretary Justine Greening was urged to explain why money was still going to Beijing, despite a decision to cut aid to 14 countries including China. Photo: Reuters

“If these aid programmes are still continuing, then I think Justine Greening needs to come to parliament and explain what the justification is, because I can’t think of one.”

The coalition government on Monday insisted it no longer gives money “directly” to China.

Instead, aid is given via non-governmental partners “working to achieve British objectives” such as tackling climate change and building sustainable economies.

A spokesman for the Foreign Office said: “Since 2011, we have stopped or are in the process of stopping bilateral aid to more than a dozen countries that are becoming more prosperous, like China and Russia.

“This has allowed us to concentrate our efforts where the need is greatest and where we can have most impact,” he said.

“It is right that where these programmes have closed that Her Majesty’s government continues to work with non-governmental partners on global issues like sustaining economic growth and climate change which affect us all.”