The Chinese guided missile destroyer No. 139 of the PLA Navy’s North Sea Fleet fires a missile during a naval drill in the Yellow Sea on Oct. 17, 2013. Photo: Xinhua

A PLA air force general has warned that any foreign aircraft disobeying warnings and deemed to be “hostile” could be shot down in China’s newly-established air defence identification zone (ADIZ), Chinese media reported on Wednesday.

China’s defence ministry last week announced its first “air defence identification zone” over a vast area of the East China Sea, covering islands that are also claimed by Japan. The act was seen as escalating tensions between two countries and has since triggered protests from Japan and “concerns” from the United States.

“[The zone] provides communication and air force identification between countries, allowing them to identify whether the opposite side is hostile,” said National Defence University professor and PLA Air Force major general Qiao Liang. “But if the subject intruding into the zone disregarded any warning, our pilots have the right to shoot it down,” Qiao said in an interview aired on the China News Service website on Tuesday. 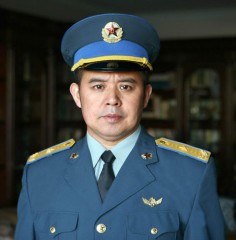 PLA air force general Qiao Liang.Responding to the Japanese government’s protests that the new zone overlaps with theirs, Qiao said: “In reverse, we could also argue their zone is overlapping ours.”

However, during the interview Qiao also urged all sides to seek peaceful ways of dealing with issues regarding the ADIZ if possible. “It would be apparently irrational to fight a war over the ADIZ. Territorial disputes like this should be resolved through negotiation,” he said.

Qiao’s comments were made public shortly before United States early on Wednesday morning announced that two of its giant B-52 bombers had flown over the zone without informing Beijing, an act seen as a challenge to China’s claim of the expanded air defence zone. The Chinese defence ministry on Wednesday said it had tracked and identified the US aircraft flying over the zone.

Many cast doubt over Qiao’s claim that the Chinese military was authorised to shoot down aircraft in the ADIZ.

Like Loading...
‹ Listing of the Most Controversial Posts as of 27 NOV 2013
Obama boycott: Major US news outlets refuse to use White House photos ›

A new way to combat SARS-CoV-2: Using a desktop-sized air-curtain to inactivate almost 100% of coronavirus particles