‘Catastrophe’ as 114 million Chinese suffer diabetes thanks to economic boom

Shocking survey shows 11.6pc of people suffer from rampant diet-related disease, with around one third of the world’s diabetics living in China

Overweight children at a fitness camp in Wuhan. Diabetes in Asians is triggered at a lower weight than in the West. Photo: Xinhua

About 11.6 per cent of adults in mainland China, or 114 million people, suffer from diabetes, a comprehensive nationwide survey on the disease shows.

It means that almost one in three diabetes sufferers globally is in China, a development one world expert on the disease called a catastrophe. It is now more common in China than in the US, where 11.3 per cent of adults are diabetic. 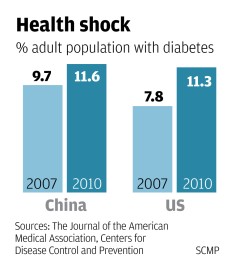 The number of diabetics on the mainland shot up by 22 million, the equivalent of Australia’s population, between 2007 and 2010, according to the study, published in the Journal of the American Medical Association.

Rapid changes in lifestyle are the key factor. American diabetics are usually overweight, but those on the mainland are not, the researchers found.

“Diabetes may have reached an alert level in the Chinese general population, with the potential for a major epidemic of diabetes-related complications, including cardiovascular disease, stroke, and chronic kidney disease,” wrote the research team, led by Guang Ning from the laboratory for endocrine and metabolic diseases at the Ministry of Health.

“Poor nutrition in utero and in early life combined with overnutrition in later life may contribute to the accelerated epidemic of diabetes in China.”

The report is based on a survey of a nationally representative sample of 98,658 adults in 2010. A similar survey in 2007 pegged diabetes prevalence at 9.7 per cent, or 92.4 million adults.

Almost two-thirds of patients treated for diabetes did not have adequate blood-sugar control, the authors found. For every mainlander diagnosed with diabetes, at least two more will be unaware they have it.

“China is now among the countries with the highest diabetes prevalence in Asia and has the largest absolute disease burden of diabetes in the world,” the researchers wrote.

Dr Chan Wing-bun, clinical director of Chinese University of Hong Kong’s Diabetes and Endocrine Centre, said: “The most alarming part of the finding is the extremely rapid increase.”

Chan said that when a poor society becomes richer, changes in diet and lifestyle mean that many people will develop diabetes. After a while, people become health-conscious and the rate falls. 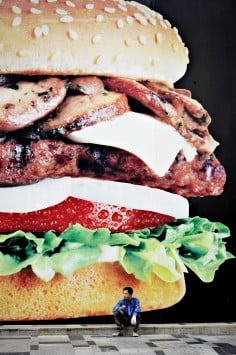 Changing diet is a factor in the increase in diabetes. Photo: AFPHe took Hong Kong as an example. The rate increased in the 1980s and 1990s, reaching about 10 per cent. But the most recent survey, conducted in 2004, saw a drop to seven per cent.

Asians have been shown to be more prone to diabetes than Westerners. Scientists have suggested that insulin cell function is weaker in Asians, said Chan.

As in the rest of Asia, the young and middle-aged were most at risk, the study found. Pre-diabetes, or those on the verge of developing diabetes, was present in 40 per cent of adults aged 18 to 29, and 47 per cent among those 30 to 39.

“The alarmingly high figures for pre-diabetes are very scary,” said Juliana Chan, a professor of medicine and therapeutics at Chinese University who wrote an editorial accompanying the study. “A lot of people think diabetes is a disease that mainly affects the elderly, but we have a very unhealthy young population that may lose their ability to work in the prime of their lives, and this would also have an impact on their families and on society,” she said.

Paul Zimmet, honorary president of the International Diabetes Federation, said diabetes in China had become a “catastrophe”. He said the increase in the prevalence of diabetes in the country was “unparalleled globally”.

“The booming economy in China has brought with it a medical problem which could bankrupt the health system,” said Zimmet. “The big question is the capacity in China to deal with a problem of such magnitude.”

China’s diabetes-related medical costs were estimated at 173.4 billion yuan (HK$214 billion) a year in 2010. The rising trend has strained health services and helped fuel growth in drug sales of 20 per cent a year.

Costs are expected to skyrocket in the next 10 to 20 years as the millions of sufferers seek treatment and care for related ailments such as kidney failure, stroke and blindness. 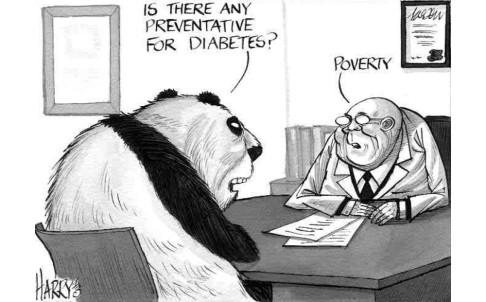