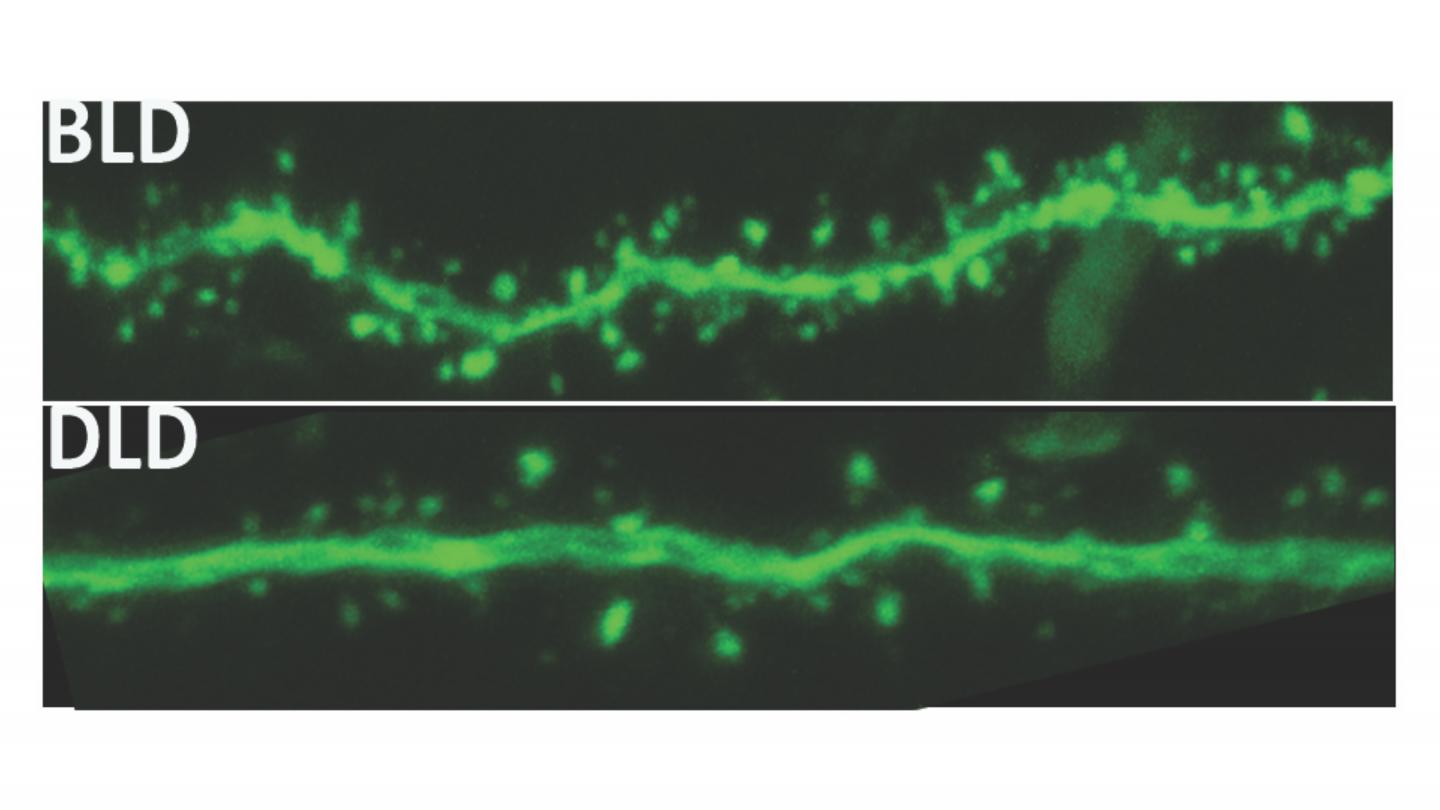 Nile grass rats exposed to dim lights (DLD) for four weeks experienced, on average, a 30 percent decrease in the number of ‘dendritic spine’ connections in their brains, which are the tiny protrusions near the solid green line, a dendrite. These rats performed poorly on a maze-like task. Rats exposed to bright light (BLD), on the other hand, had many more of the dendritic connections and showed superior performance on the task.

The researchers studied the brains of Nile grass rats (which, like humans, are diurnal and sleep at night) after exposing them to dim and bright light for four weeks. The rodents exposed to dim light lost about 30 percent of capacity in the hippocampus, a critical brain region for learning and memory, and performed poorly on a spatial task they had trained on previously.

The study, funded by the National Institutes of Health, is the first to show that changes in environmental light, in a range normally experienced by humans, leads to structural changes in the brain. Americans, on average, spend about 90 percent of their time indoors, according to the Environmental Protection Agency.

“When we exposed the rats to dim light, mimicking the cloudy days of Midwestern winters or typical indoor lighting, the animals showed impairments in spatial learning,” said Antonio “Tony” Nunez, psychology professor and co-investigator on the study. “This is similar to when people can’t find their way back to their cars in a busy parking lot after spending a few hours in a shopping mall or movie theater.”

Nunez collaborated with Lily Yan, associate professor of psychology and principal investigator on the project, and Joel Soler, a doctoral graduate student in psychology. Soler is also lead author of a paper on the findings published in the journal Hippocampus.

Soler said sustained exposure to dim light led to significant reductions in a substance called brain derived neurotrophic factor – a peptide that helps maintain healthy connections and neurons in the hippocampus – and in dendritic spines, or the connections that allow neurons to “talk” to one another.

“Since there are fewer connections being made, this results in diminished learning and memory performance that is dependent upon the hippocampus,” Soler said. “In other words, dim lights are producing dimwits.”

Interestingly, light does not directly affect the hippocampus, meaning it acts first other sites within the brain after passing through the eyes. Yan said the research team is investigating one potential site in the rodents’ brains – a group of neurons in the hypothalamus that produce a peptide called orexin that’s known to influence a variety of brain functions. One of their major research questions: If orexin is given to the rats that are exposed to dim light, will their brains recover without being re-exposed to bright light?

The project could have implications for the elderly and people with glaucoma, retinal degeneration or cognitive impairments.

“For people with eye disease who don’t receive much light, can we directly manipulate this group of neurons in the brain, bypassing the eye, and provide them with the same benefits of bright light exposure?” Yan said. “Another possibility is improving the cognitive function in the aging population and those with neurological disorders. Can we help them recover from the impairment or prevent further decline?”