Home › All Posts › Societal › Flourishing under an abusive boss? You may be a psychopath, study shows

Flourishing under an abusive boss? You may be a psychopath, study shows 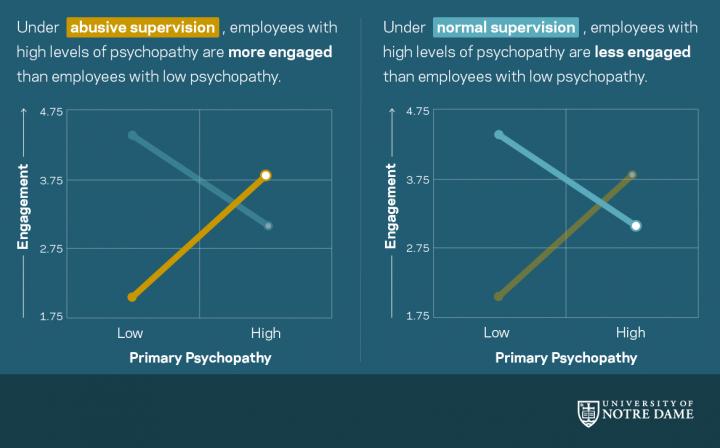 When you hear the term “psychopath,” you probably picture Charles Manson or Jeffrey Dahmer. Psychologists, however, define it as a personality trait, and we all fall somewhere along a scale from low to high levels of psychopathy.

In the workplace, employees respond differently to abusive management styles, in part due to their varying levels of psychopathy, according to a new study from the University of Notre Dame.

Certain types of “psychopaths” actually benefit and flourish under abusive bosses, according to “Are ‘Bad’ Employees Happier Under Bad Bosses? Differing Effects of Abusive Supervision on Low and High Primary Psychopathy Employees.” The study is forthcoming in the Journal of Business Ethics by Charlice Hurst, assistant professor of management in Notre Dame’s Mendoza College of Business.

“There are primary and secondary dimensions of psychopathy,” Hurst explains. “Both consist of high levels of antisocial behavior; however, people who score high in primary psychopathy lack empathy and are cool-headed and fearless. They don’t react to things that cause other people to feel stressed, fearful or angry. Secondary psychopaths are more hot-headed and impulsive.

Hurst, along with Lauren Simon (University of Arkansas), Yongsuhk Jung (Korea Air Force Academy) and Dante Pirouz (Western University), conducted two studies with 419 working adults. In one study, participants were asked to react to profiles of managers depicted as constructive or abusive. In that study, there were no differences in anger between high and low primary psychopathy participants, but the participants high in primary psychopathy reported feeling happier after imagining themselves working for an abusive manager.

In a second study, participants rated how abusive their own supervisors were. They were asked about behaviors such as rudeness, gossip about employees, not giving proper credit for work, invasion of privacy and breaking promises. Those high in primary psychopathy reported feeling less angry, more positive and engaged.

Hurst says the research underscores the many ways that enabling managers to abuse employees can be harmful.

“It may reward and retain exactly the kind of people who are likely to perpetuate abusive cultures,” she says. “Psychopaths thriving under abusive supervisors would be better positioned to get ahead of their peers.”

Companies use engagement as a measure of organizational health, but Hurst’s research shows the importance of delving deeper.

“If they have a problem of endemic abuse,” Hurst says, “like Wells Fargo — where former employees have reported that managers used tactics designed to induce fear and shame in order to achieve unrealistic sales goals –and upper-level managers are either unaware of it or are not taking action, they might notice increasing levels of engagement due to turnover among employees low in primary psychopathy and retention of those high in primary psychopathy. At the extreme, they could end up with a highly engaged workforce of psychopaths.”