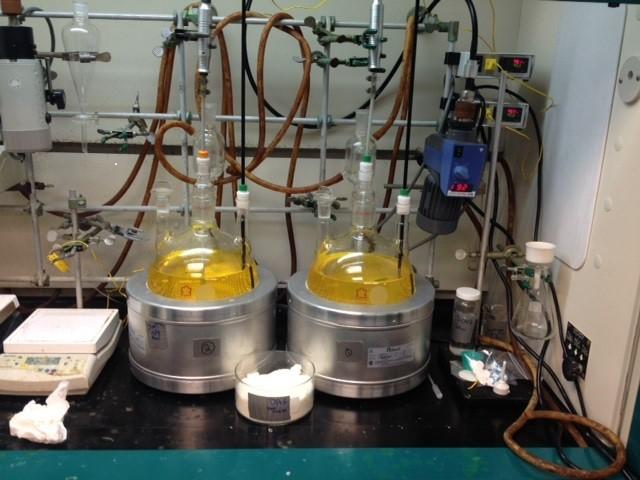 IMAGE: Diaminoglyoxime is shown in the foreground, following filtration and drying from the reaction mixture. In the background, DAG is being synthesized in a pair of 500 gram scales.

ABERDEEN PROVING GROUND, Md. (Jan. 18, 2018) – Scientists from the U.S. Army Research Laboratory and the Lawrence Livermore National Laboratory found a solution to a significant challenge in making high-energy explosives. They safely improved the overall chemical yield derived from diaminoglyoxime, known as DAG, and significantly increased the amount of material made per reaction.

Scientists traditionally synthesize DAG by reacting a mixture of hydroxylamine hydrochloride and sodium hydroxide with an aqueous solution of the dialdehyde glyoxal at 95?. DAG proceeds in a low chemical yield of 40 percent by this synthesis method, with the remaining 60 percent of the possible product being lost.

“A low-yielding reaction is problematic because this means that less material is made, thus increasing overall production costs. The traditional method of making DAG is not safe because the reaction releases a significant amount of heat. This can lead to an unintentional combustion event or an unintended explosion. Due in part to these cost and safety issues, explosives derived from DAG have seen limited potential application,” said Dr. Jesse J. Sabatini, an ARL chemist.

“By simply adding an aqueous solution of glyoxal to an aqueous solution of hydroxylamine heated to 95 o C, followed by stirring for 3 days, DAG is produced in a much improved 80% yield. Since the new method to make DAG does not release a significant amount of heat, the potential explosion and combustion hazards are minimized. Therefore, the new DAG synthesis is much cheaper and safer to produce, thus paving the way for this material to be made in larger scale quantities,” Sabatini said.

This research has been published in a paper Sabatini coauthored with ARL colleague Eric C. Johnson and Lawrence Livermore National Laboratory’s Dr. Nathaniel B. Zuckerman. The paper describes the discovery of a higher-yielding, safer, and scalable synthesis of DAG (Organic Process Research & Development, DOI: 10.1021/acs.oprd.7b00329; http://pubs.acs.org/doi/10.1021/acs.oprd.7b00329).

Since the paper was published, Johnson has since synthesized multi-pound quantities of DAG at ARL. Now that a higher-yielding, safer, and scalable process for producing DAG is in place, promising energetic materials made from this intermediate may be explored for their potential explosive applications in an efficient manner.