How fear alone can cause animal extinction 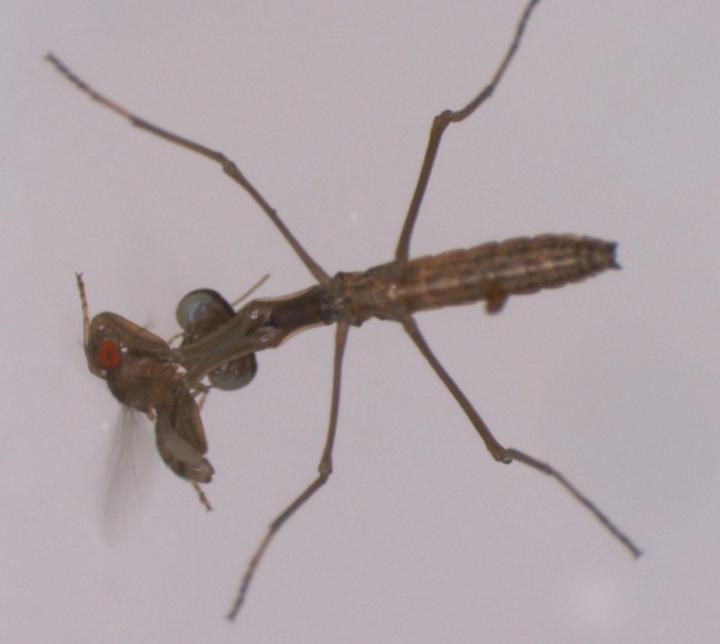 Researchers have discovered that the fear of predators causes flies to spend less time eating, more time being vigilant, have less sex, and produce fewer offspring

Fear alone may contribute to the extinction of animal populations according to a recent study. When scientists from McGill University and the University of Guelph exposed fruit flies to the scent of a praying mantis, a known predator, they found that the risk of extinction increased up to seven fold. The increased risk of extinction occurred because at small population sizes, as the flies spent more time being vigilant and less time eating, populations that declined could not quickly rebound.

“It has been something of a mystery why predators are so important in animal extinctions,” says Kyle Elliott, an assistant professor in McGill University’s Dept. of Natural Resource Sciences and the first author of a recent study on the subject published in the Proceedings of the Royal Society B. “As prey populations decline, predators should simply switch to other prey. However, if, as we showed, the scent is sufficient to continue population decline, then even if the predators move on to other prey, and their scent disappears, this is unimportant for the survival of the population that is at risk whose numbers and reproductive ability have been critically affected by the passing smell of death.”

It’s a finding that sheds light on a long-standing biological conundrum related to population size and extinction, known as the Allee effect, after Walter Clyde Allee, the man who first described the phenomenon.

A possible solution to a long-standing scientific question

Typically, animal populations show what is called “density-dependence”. This means that as a population increases, competition for food and mates increases, and reproductive success and survival decline. One might assume that the reverse would also hold true. That is, that the smallest populations would have the highest vital (or growth) rates and would quickly rebound from declines in population. However, paradoxically, in some cases exactly the opposite happens and small populations have the lowest vital rates. This puzzling phenomenon is one aspect of what is known as the Allee effect.

By looking at fruit flies, rather than social animals, the researchers believe that they have gained a greater understanding of the role that fear may play in the decline and extinctions of various populations.

“When scientists set out to look for the causes of the Allee effect in the past, they have tended to focus on intrinsic parameters, such as the difficulty finding a mate, inbreeding or social dysfunction in small populations,” explains Elliott. “Examples with predators were limited to social animals, such as meerkats, where small groups spend more time being vigilant and consequently are more likely to go extinct. We show that the same principles are true even in species such as fruit flies that are not in tightly-knit groups. Fear caused flies to spend less time eating, more time being vigilant, have less sex, and produce fewer offspring. We suggest that the fear effects become more pronounced as population size declines and lead to reduced resilience in small populations and an increased likelihood of extinction.”

How the experiment was done

Scientists exposed varying sizes of populations of fruit flies to the scent of praying mantises during breeding and non-breeding seasons. They then measured how exposure to this smell affected the body weight and fecundity of the following generation of fruit flies. They discovered that in small populations, the scent of the predator was enough to significantly reduce both fecundity and offspring growth. This suggests that once a population has reached a limited size, the effect of fear alone may lead to its extinction.

To read “Fear creates an Allee effect: experimental evidence from seasonal populations” by Kyle Elliott et al in the Proceedings of the Royal Society: http://rspb.royalsocietypublishing.org/content/284/1857/20170878

The research was funded by: NSERC.

Are we “Waiting for Godot”– A metaphor for Covid-19