Home › All Posts › Societal › Escalation / Destabilization Conflict › ‘Are you from China?’ College student, 20, killed by racist thugs in New Delhi

‘Are you from China?’ College student, 20, killed by racist thugs in New Delhi

PUBLISHED : Monday, 03 February, 2014, 1:44am
McClatchy-Tribune in New Delhi
The death of Nido Tania on Thursday sparked a swift outcry across social media in India. Tania’s supporters produced images, including the one above. Photo: SCMP
–

He was a slight young man, who sported hipster eyeglasses and a wispy moustache. He had dyed his spiky hair blond, but that was not the only thing that made college student Nido Tania stand out in the Indian capital.

Tania was from northeastern India, a narrow strip of territory wedged between China and Myanmar, whose people say they face discrimination in the rest of the country for having “Asian” facial features. When Tania, 20, stopped in a dairy to ask for directions on Tuesday afternoon, the shopkeeper taunted Tania for not knowing his way around, saying, “Are you from China?” and making fun of his hair.

The incident escalated into a violent altercation in which several men thrashed him with sticks and steel rods, friends and officials said.

He died in his bed the next day, succumbing to severe injuries to the chest and brain, according to preliminary medical results provided to his family.

The incident has sparked outrage in New Delhi, which was already reeling from a spate of high-profile rape cases, and has added to a growing sense of insecurity in a capital that is aiming to be a showcase for India’s growing economic might. 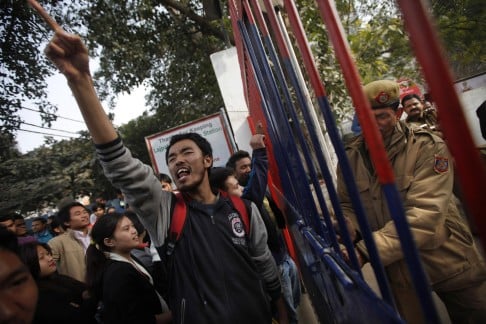 Protesters shout slogans outside a police station in New Delhi on Saturday. Many people have criticised the response of the Delhi police to the young man’s beating and death. Photo: AP

Hundreds of protesters rallied on Saturday in Lajpat Nagar, the market where the beating took place, calling it a hate crime and demanding that the assailants be prosecuted.

“This was a racist hate crime,” said Albina Subba, an advertising writer originally from the northeast Himalayan town of Darjeeling.

“Our community is often targeted like this … We look different, so it’s easy for people to see we’re not from Delhi.”

She added: “We have little faith in the Delhi police, but this time we want them to take action.”

“This happens every day in Delhi. Each and every one of us has experienced discrimination because of our physical features,” said Sophy Chamroy, a 22-year-old student from the northeastern state of Manipur.

India’s 1.2 billion people have many languages and customs but, as with the rape cases, racially motivated assaults seem to occur in New Delhi and other major cities with regularity. Many victims from the northeast are young people who have migrated to the capital for school or job opportunities lacking in their poorer home areas.

Last year in New Delhi, three students from Manipur were beaten by neighbours. In a separate case, a 21-year-old beautician from Manipur was found dead in her apartment with injuries to her face and toes. Police labelled it a suicide and dropped the case but many suspected she was slain.

So widespread is the discrimination against people from northeastern India that the federal government in 2012 passed a law that punishes the use of a racial slur with up to five years in prison. Still, activists say, authorities rarely enforce such laws and police are as likely to participate in discrimination as intervene to stop it.

“You don’t know what is on the minds of people in Delhi, because these incidents keep on recurring,” said Geetartha Barua, an official with the state government of Arunachal Pradesh, where Tania lived.

Tania was in New Delhi on vacation and going to visit an ailing friend in the area near Lajpat Nagar when he walked into the dairy, friends said.

Tania smashed a glass display case in anger after being taunted, prompting the shopkeeper and several other men from the market to set upon him and a friend. The shopkeepers called the police, who got Tania to pay about US$120 for the broken glass. The police did not take any action against the assailants, Barua said.

Police officers let Tania go, but when he passed the shop a second time the attackers beat him again, said Jotam Toko Tagam, the former president of a New Delhi organisation for students from Arunachal Pradesh. When he reached his sister’s flat, where he was staying, he complained of pain and was bleeding from his wrist. He fell asleep early on Thursday morning after applying balms across his body, Tagam said. Around 1pm the next day, friends tried to wake him but found his body cold and limp. Brought to a nearby hospital, he was pronounced dead on arrival, Barua said.

The case sparked an outcry across Indian media and websites with many criticising the response by the Delhi police. Three men reportedly have been detained for questioning. Barua said police did not open a murder investigation until 24 hours after Tania had died, after the incident had begun to make news.

“We are being forced to go exert pressure on different quarters to get the police to investigate this matter properly, at a time when the situation is very sad,” Barua said.