More than 100 wounded, many critical, in the deadliest attack on Christians in Pakistan

Relatives try to comfort each other after the bombing attack at a church in Peshawar, Khyber Pakhtunkhwa province. Photo: EPA

A twin suicide bombing killed more than 78 people, including 34 women and seven children, at a church service in northwest Pakistan yesterday in what is believed to be the deadliest attack on Christians in the country. 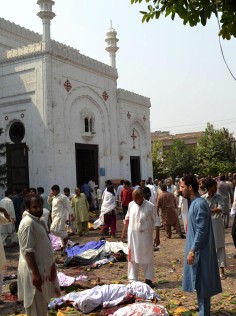 Bodies lie outside the church targeted in Peshawar, northwest Pakistan. Photo: XinhuaThe two attackers struck at the end of a service at All Saints Church in Peshawar, the main town in Khyber Pakhtunkhwa province which has borne the brunt of a bloody Islamist insurgency in recent years.

Sahibzada Anees, one of Peshawar’s most senior officials, said the bombers struck when the service had just ended. “Most of the wounded are in critical condition,” Anees said.

“We are in an area which is a target of terrorism and within that area there was a special security arrangement for the church. We are in a rescue phase and once it is over we will investigate what went wrong.”

Former minister for inter-faith harmony Paul Bhatti and provincial lawmaker Fredrich Azeem Ghauri both said the attack was the deadliest ever targeting Christians in Pakistan.

Schoolteacher Nazir Khan, 50, said the service had just ended and at least 400 worshippers were greeting each other when there was a huge explosion.

“A huge blast threw me on the floor and as soon as I regained my senses, a second blast took place and I saw wounded people everywhere,” Khan said.

Shreds of flesh and bloodstains covered the walls and floor of the church, whose windows were ripped apart by the blast. 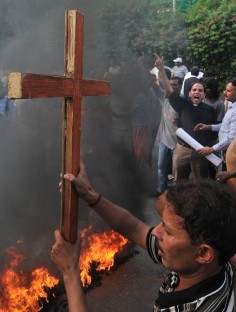 Christians protest in Lahore over the suicide bombings. Photo: AFPPages of a Bible were scattered near the altar and rice meals mingled with dust on the floor amid shattered benches. Walls were gouged with ball bearings used in the explosives.

Grieving relatives blocked the main highway with bodies of the victims to protest against the killings. Christians in Karachi, Lahore, Multan and other cities also staged rallies to condemn the killings and demand state protection for their lives and properties.

In Karachi, protesters clashed with police when they tried to clear a road in Isa Nagri, a low-income Christian neighbourhood.

Islamist militants have carried out hundreds of bombings targeting security forces and minority Muslim groups they regard as heretical, but attacks on Christians have previously largely been confined to grenade attacks and occasional riots.

“Now after this attack, Christians across Pakistan will fear for their lives,” he warned.

Quercetin and Herbacetin may inhibit the Coronavirus