Units of the Indian Army and the Indo-Tibetan Border Police Force (ITBP) have reported Unidentified Flying Objects (UFOS) in the Ladakh region of Jammu and Kashmir.

Units of the Indian Army and the Indo-Tibetan Border Police Force (ITBP) have reported Unidentified Flying Objects (UFOS) in the Ladakh region of Jammu and Kashmir.

An ITBP unit based in Thakung, close to the Pangong Tso Lake, reported over 100 sightings of luminous objects between August 1 and October 15 this year.

In reports sent to their Delhi headquarters in September, and to the Prime Minister’s Office (PMO), they described sighting “Unidentified Luminous Objects” at day and by night.

The yellowish spheres appear to l 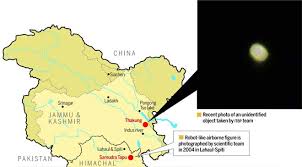 ift off from the horizon on the Chinese side and slowly traverse the sky for three to five hours before disappearing.

These were not unmanned aerial vehicles (UAVS), drones or even low earth-orbiting satellites, say Army officials who have studied the hazy photographs taken by ITBP.

Three of these drones intruded into territory claimed by India along the 365-km-long border with China in Ladakh, manned by ITBP.

Such mysterious lights have been sighted before in Ladakh, a barren, 86,000 sq km heavily militarised zone wedged between Pakistan-occupied-Kashmir and Chinese-occupied Aksai Chin.

The persistent sightings by the ITBP this year, however, worried the Army’s Leh-based 14 Corps. The ITBP, did not respond to a detailed India Today questionnaire.