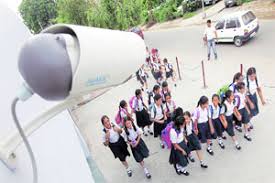 Over 200 UK state schools have installed cameras in bathrooms and changing rooms to monitor students, a recent surveillance survey reported. British parents will likely be shocked by the study’s findings.

­The survey is based on a freedom of information request conducted by Big Brother Watch, an anti-surveillance activist group. The group said they were shaken by the results, which was much higher and more extensive than expected.

The report “will come as a shock to many parents”, Nick Pickles, Director of Big Brother Watch said. “Schools need to come clean about why they are using these cameras and what is happening to the footage”.

A total of 825 cameras were installed in the bathrooms and changing rooms of 207 different schools across England, Scotland and Wales, according to data provided by more than 2,000 schools.

It is unknown where the cameras are located in the bathrooms and changing rooms, who is watching the security footage and whether any pupils were recorded while changing.

Video recording in toilets or changing rooms is legal, but recommended only for exceptional circumstances, the Information Commissioner’s Office (ICO) reported. The ICO is an independent authority in the UK, whose duties include promoting privacy.

Research also showed that the extent of CCTV use varied widely from school to school. “With some schools seeing a ratio of one camera for every five pupils,” the report said. “CCTV appears to be used as a quick fix to much more complex problems and issues that simply cannot be solved with passive surveillance.”

UK schools so unsafe that surveillance needed in the most private spaces?

Since the 1990s, the UK’s Home Office has spent 78 percent of its crime prevention budget on CCTV installations, and schools have likewise invested significant resources in their own surveillance equipment, the Big Brother Watch report said.

No significant research has been done into whether CCTV cameras actually lower crime rates.

Big Brother Watch was able to locate a single study by the French Institut D’ Aménagement Et D’Urbanisme, which concluded that theft and burglary continued to increase after the 2007 installation of CCTV in the Île-de-France region. A marginal reduction in disorderly incidents in schools was also reported.

Like Loading...
‹ Sen. Jay Rockefeller pitches cybersecurity bill to top CEOs: Offers them immunity from liability in the event of a cyberattack
Author defends Monsanto GM study as EU orders review; Claims ” people are responsible and guilty of authorizing this GMO after only three months,” ›